GTA Wiki
Register
Don't have an account?
Sign In
Advertisement
in: Parks, Parks in GTA V, Parks in GTA Online,
and 8 more
English

This area is not announced on the police dispatcher.

Legion Square is located in a commercial district, bordering Pillbox Hill to the west and Mission Row to the east. The Square itself is composed primarily of sculptures. Large red cubes are a prominent feature, along with other instances of public art. There are numerous banners around the park advertising exhibits sponsored by the Fleeca art fund.

Beyond the art, there is a shallow pool on the square's southern end, and in the center is a tall structure which could be a building, though there are no clearly marked entrances. On the west side of the square is a ramp which leads to an underground garage; however, the garage itself is not accessible. The square is crowded during daytime.

The description of Art to Art states that the square is "the heart of old downtown."

Like it's real life counterpart, Legion Square serves as the location of a large Christmas tree (in the north east corner of the park) in Grand Theft Auto Online for the duration of the Festive Surprise annual events. 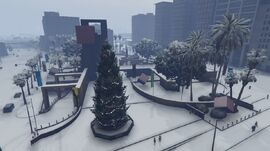 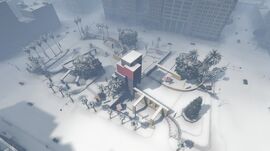 Another view of Legion Square during snowfall.