"The aggressive styling and hyper tuned engine make this a bike that's ready for a fight. Most likely it'll be fighting the back of a truck or a highway barrier, but that'll be down to you.
Features KERS Kinetic energy recovery system, which uses the bike's axle power to generate energy for the hyper cell battery. This power can be delivered to the back wheel via a direct drive brushless motor, giving the bike a hi torque speed boost."
―Legendary Motorsport description.

The Principe Lectro is a streetfighter featured in Grand Theft Auto Online as part of the Heists Update.

The Lectro's overall design appears to be based on the Ducati Streetfighter S, with some elements from the MV Agusta Brutale series.

The Lectro is unique for having tubular protective frames around the engine bay and several modifications to complement its design, including an air filter below the intercooler.

As explained in the website statement, the Lectro features a Kinetic Energy Recovery System (KERS), which is an automotive system for recovering a moving vehicle's otherwise lost kinetic energy under braking and is stored in a reservoir for later use in acceleration. "Kers" can be seen marked on the bike.

This particular feature is represented by the design of the rear area, where the bike has two wires coming from the rear wheel and runs through the left side of the swingarm. On the swingarm pivot, the wires lead up to a hyper cell battery located behind the engine. This cell battery is connected to a direct drive brushless motor, which receives the power of the cell battery and transmits it to the rear wheel via a chain drive, along with the primary chain drive connected to the engine.

The Lectro is a fairly average performing motorcycle. Its top speed and acceleration are more similar to the Nemesis, being decent but nothing worth noting. Players can use the KERS boost by pressing the left stick to gain a boost, which can be refilled by letting go of the accelerator.

When using the KERS boost, the Lectro is able to keep up, albeit shortly, to the Akuma. However, with only a couple seconds of KERS use before it is used up, the Lectro will begin lagging behind as soon as the KERS is used up. The motorcycle's handling is again, not very notable, though it does feel noticeably heavier than similar motorcycles. Unlike similar motorcycles, the Lectro cannot wheelie at top speed. The bike sports a very rough, high-revving engine.

A Heist Screenshot of the Lectro.

Another view of the Lectro. 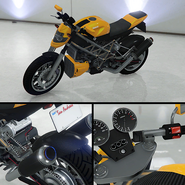 The Lectro on Legendary Motorsport in the enhanced version.

The Lectro on the Rockstar Games Social Club.

The Lectro on the updated Rockstar Games Social Club.

The Lectro in the cinematic preview on Rockstar Games Social Club.
Add a photo to this gallery 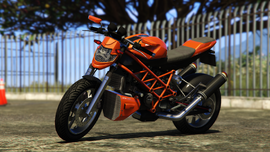 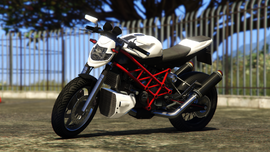 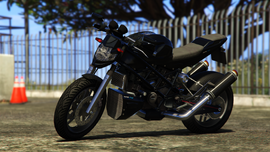 Retrieved from "https://gta.fandom.com/wiki/Lectro?oldid=1221215"
Community content is available under CC-BY-SA unless otherwise noted.