Carl Johnson talks on the phone with Mike Toreno

Toreno: "Now listen, you're going to have to learn how to fly."
CJ: "No, I ain't."
Toreno: "Yes, actually, you are."
—Mike Toreno gives Carl Johnson his instructions

Learning to Fly is a mission in Grand Theft Auto: San Andreas given to protagonist Carl Johnson by Mike Toreno.

After purchasing the Verdant Meadows Airfield, Toreno informs Carl that he is going to be taking flying lessons. Carl initially refuses, but once Toreno claims that this will help secure his brother's release from prison, Carl relents and agrees to the task. Toreno explains that he has set up a television screen showing the ten lessons Carl will be completing. After completing all ten missions successfully, Carl receives his pilot's licence.

If the player does not attempt the missions for a certain length of time, they will receive the following three phone calls from Toreno until they do so.

CJ: Hey, wassup?
Toreno: Hey, how's the flying coming along?
CJ: Yeah, well shit man, I was gonna holla at you about that cause, you know, I'm...
Toreno: Will you listen to yourself? Admit it, you're scared.
CJ: Maybe just a little
Toreno: Until you've walked into the middle of Bedouin arms dealer's camp with nothing but a briefcase full of cash, you don't know the meaning of fear, okay?
CJ: Oh Yeah? Try going to the swap meet in Idlewood sometime.
Toreno: Learn to fly, Carl.


CJ: What do you want, Toreno?
Toreno: Well, what do you want, Carl? You want your brother out of jail?
CJ: Ok, listen, I'm trying man, I really am.
Toreno: I'm gonna let you in on a little secret, Carl. The one difference between those that tried and died, and those that still walk this Earth, is belief in self. Nothing is impossible, Carl. Beat your fears, focus your mind, and learn to fly!
CJ: Ok, ok, I'll... Toreno? Oh shit...

CJ: Toreno?
Toreno: - Carl, learn to fly.
CJ: I'm on it man, I swear.
Toreno: Yeah, I'm on it man I swear, same old broken record Carl, but that's fine, because your brother's getting a new cell mate tonight. Horse Cock Harry. And I'm sending a present, little wedding present. Big tube of lube!
CJ: Shit dude, ok, ok, I swear man, I'm gonna be the best pilot!
Toreno: I'd love to hear you Carl, I can't hear you, all I can hear is your brother's love cries, as eight kilometers of cock finds its way up his ass. Aooooowww - that's your brother, ok? No big problem.
CJ: Wait! Please, man!
Toreno: That was my last motivational speech, understand? Am I being too spiritual for you, Carl?
CJ: Ok man, I get the message.

Carl Johnson: Hey, Woozie, man, what you been up to?

Wu Zi Mu: Come along and see for yourself. I got a little business proposition for you. Come over and see the setup, my friend.

Wu Zi Mu: Like it? You're gonna love it! It's the Four Dragons Casino in Las Venturas. I'll see you soon, yeah?

Following this mission, a Rustler will always spawn in one of the hangars at the airfield (along with a Stuntplane if the tests were passed with at least a silver medal or a Hunter for all gold medals). The Police Maverick on the roof of the Los Santos Police Department also appears. Completing the mission grants Carl his pilot's licence, allowing him to enter any of San Andreas' airports via security gates and pilot any of the aircraft at the airport.

The missions N.O.E. and Fender Ketchup are also unlocked, as are the safehouses in Las Venturas made purchasable (contrary to some walkthroughs, the city itself is accessible prior to this mission). All Victim clothing stores in the state will also be unlocked. The 6-star wanted level is now obtainable. 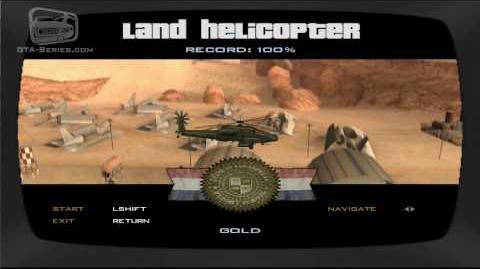 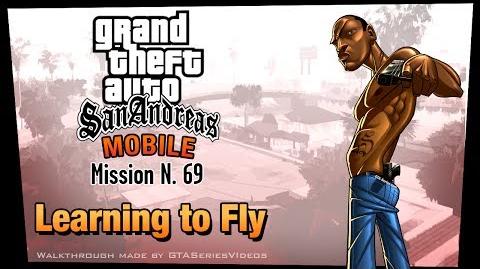 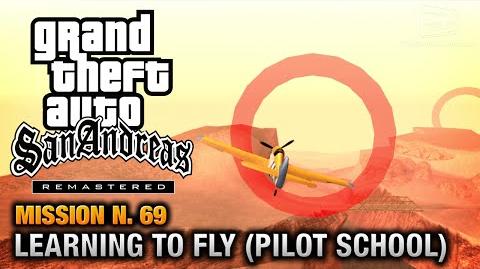 Retrieved from "https://gta.fandom.com/wiki/Learning_to_Fly?oldid=1316940"
Community content is available under CC-BY-SA unless otherwise noted.