No Way on the Subway

In-game time
“You listen to me Isaac - listen, dick. It's not my fault you got robbed. Not my fault! I had nothing to do with it. Nothing!”

Late Checkout is the final mission in Grand Theft Auto IV given by Ray Boccino to Niko Bellic.

Ray has lost his money, his diamonds, and his temper. Niko finds him in Drusilla's, arguing with Isaac over the phone. He throws the phone at a waiter and demands that Niko go kill him at the Majestic Hotel where Isaac is staying at. Niko arrives at the hotel, fights his way through a number of guards, kills Isaac and his two associates (one of them can be spared), and escapes the hotel. After this, Niko refuses to do any more work for Ray.

Niko goes to the Majestic Hotel in Lower Middle Park. There are two main ways that Niko can get to the penthouse: by elevator at the lobby, or by window cleaning elevator behind the hotel.

In the lobby, if the player faces the game camera to the right, Niko will see the elevators, the player must then press the button and enter the elevator which will bring him to the 30th floor. There are roughly 25 men between the target and Niko and the other two targets are on different levels of the penthouse. Niko must fight the way through Isaac's muscle.

The first target will be in the kitchen, Niko has a chance to spare or eliminate him. There's a health pack in there, too.

Niko must go up a flight of stairs to find Isaac himself in his bedroom. Once reaching the room, he'll be sending his girl out. Eliminating the girl does not affect the mission. Niko must get into the room and kill him. If a pistol is used for this, an execution scene will occur.

The third target and some more hit men will be on the roof. It is a bit hard to fight because there's not much good cover at the rooftop greenhouse. The best and easiest way is to use shoot at the nearby propane tank, causing the last needed target to blow up and fall down the building.

Behind the Majestic Hotel, there is a cleaning lift in the alley. Niko can go and ride it up to the roof and work this way down through the penthouse suite. This avoids the assault of a number of bodyguards on the floor below. It is possible to make a similar trick by flying a helicopter or taking a helicopter ride from Brucie, and then land on here to proceed with the mission.

Upon climbing to the roof, the dealer and a few gunmen are off to the right as the player reaches the top of the staircase. A propane canister attached to a barbecue grill across the pool can be found. If the propane tank is shot, the explosion will blow another diamond dealer right off the Majestic roof. Also a Body Armor in the corner of the roof near the glass enclosure can be found.

Niko finishes them off and escapes the hotel as there is a two star wanted level attained. One way is to flee to the roof and find the window cleaning elevator. However, there will always be a police car waiting at the exit of the alleyway. Another way is go back to the elevator at 30F and leave the hotel via the front door. There will still be Jewish mobsters trying to prevent Niko's escape, and no mission-spawned cops wait outside. Either method three Jewish Mob gangbangers will make an assault on Niko during the getaway.

After leaving the hotel, this mission is completed.

After this mission, Niko will tell Ray that he will no longer be his cleaning guy. He will still say this even if the mission Weekend at Florian's hasn't been completed yet.

"A party has ended in gunfire."

Jenny Acorn: "Guests at the fancy Majestic Hotel on Middle Park were disturbed by a shootout. Diamond dealer Isaac Roth and several business associates were found dead in the penthouse. Mr. Roth had previously been accused of importing illegal "conflict" diamonds while police had also been investigating Roth's links to the mob. Now, they're searching for his killer."

"A horrific massacre has taken place in the penthouse of the Majestic Hotel. Diamond dealer Isaac Roth and several business associates were killed in a bloody shootout. All the guests, including important dignitaries and movie stars, were evacuated. The management of the hotel said they did not know when the hotel would reopen. Police are looking into Mr. Roth's alleged mob links in order to find a motive for the killings. Roth had been known to import illegal "conflict" diamonds." 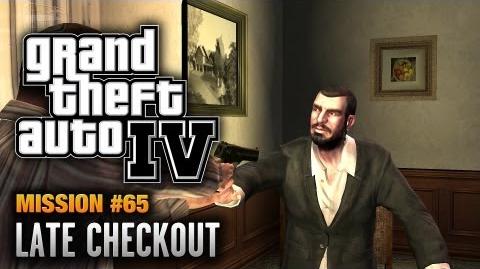 Niko about to murder Issac Roth.

Isaac's room before Niko gets in.