View source
This is an article on the update. You maybe looking for Last Team Standing

The Last Team Standing Update is a content update for Grand Theft Auto Online and Grand Theft Auto V, released on October 2, 2014, as part of the 1.17 patch. It marks the one year anniversary of GTA Online by updating one of the game's most popular side missions; Last Team Standing, albeit being released the day after the anniversary. It was the first GTA Online and GTA V update not released on a Tuesday.

The update mainly adds the ability to build custom Last Team Standing jobs in the Content Creator. It also features two motorcycles, the Shitzu Hakuchou and the LCC Innovation, and one new sports car, the Lampadati Furore GT. Two new weapons were added, the Marksman Rifle and the Heavy Shotgun, along with new clothing items which include tactical gear and bulletproof helmets.

Less violent than the average apartment building residents' committee meeting, this cramped LTS pits two wings of a building against each other. Try to stay on the rooftops, and look for long-ranged attacks across the courtyard and close-quarters clashes on the footbridge.

Draw a line in the sand with this Del Perro Beach LTS. Teams start at either end of the beachfront houses. They can go at each other directly or take the pedestrian bridges across the WH to pick up weapons. Dr. Friedlander isn't running his conflict resolution seminar this week.

As good a place as any to make a stand, three groups take the third way at the Grand Banks Steel foundry. Fight on the rooftops, in the tunnels, and along the gangways to be the only team that doesn't get to fulfil their death wish.

Two teams snipe each other from rooftops or get down and dirty in the alleys with shotguns until there's only one of them left. Hawick hasn't seen this many unfortunate accidents since speedballs were cool in the 80s.

When the dust settles, and the rivers stop running with blood, who'll be left on top of the second highest mountain in Southern San Andreas? Two teams fight to be king of the hill on the open, almost coverless slopes of Mount Josiah.

Something's happening behind the mysterious chain link fences, and non-descript 'government facility' signs off the Palomino Freeway. Two teams have taken time off from spying on personal communications to fight for supremacy on the rooftops, walkways, and parking lots of the N.O.O.S.E. facility. Look up for the best weapons.

Some places get all the luck. Two teams face off with tanks and explosives and don't mind if they turn the whole town to rubble. Who'll be left standing in what's left of Paleto Bay?

There's no escape from Los Santos. One team tries to hold out at the top of a skyscraper construction site armed only with sniper rifles and heavy weapons. The other team launches a four pronged assault in Buzzard attack helicopters.

Gang warfare's gotten really out of hand as two teams come at each other with tanks, motorbikes, and explosives in the concrete channel of the LS River. Try to stay in the storm drain, and don't worry about flash flooding, there's a drought in San Andreas after all.

Lonely truckers and enterprising hitchhikers are in for a scare as this pit stop on the Palomino sees its share of the action. Small scale LTS that'll make good use of the Heavy Shotgun.

A player using the Heavy Shotgun and the new camouflage outfit.

The camouflage outfit and the Hakuchou.

The "Please Stop Me" Mask. 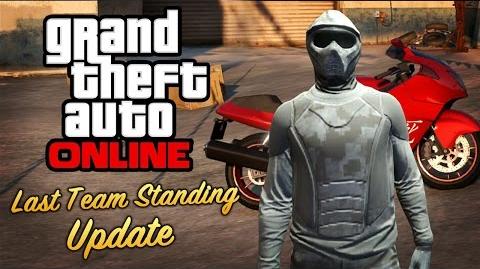