In-game time
“You can tell the markets getting real crazy when even hairy ass biker fools is trying to make a killing while they can. Thing is, I don't care how hard times is about to get, they got no business trying to muscle into my town. Do me a favor, take whatever product they got. It's free money, you feel me? Bring what you find to my spot. We'll add it to the stockpile.”
— In-game description.

Fast Peddling is a Last Play mission in Grand Theft Auto Online as part of the The Diamond Casino Heist update, released on April 23, 2020, during the Gerald's Last Play Week event. It is given to players by Gerald and is available from 1 to 4 players.

Gerald is angry The Lost MC has been interfering with his business, so he asks the player to steal some of their product and bring it back to his apartment.

There are four locations with the drugs: a cocaine lockup, a meth lab, a weed farm, and a cargo warehouse. Each location is protected by Lost MC members, who will immediately attack the player when approached. Lost MC members will also chase and shoot the player as they travel between locations. Once all drugs are collected, the player must deliver them to Gerald's apartment to complete the mission.

“Now these bikers aint pros, but that don't mean they pushovers. Find em, hit em, get the shit and get the hell outta there.”
— Shortly after starting the mission.
“Keep your eye on the prize. Go in hard, go in sneaky, go in with a bunch of flowers, idgaf. Just get me my deal.”
— When the player is making their way to a target.
“We aint got time to get horticultural here. Find anything they got bagged up and ready, leave the crop where it is.”
— When the player is inside the weed farm.
“Since when do leather-wearing cueball motherfuckers run the biggest operation in the state? Mustve got wind of whats coming.”
— After three of the four batches of drugs are stolen.
“When you're done with these fools, don't forget we here for the product too. Get it back here and let's split some profits.”
— When the last batch of drugs is stolen.
“This the natural order of things, homie. When shit goes south its dog eat dog, and these fools got no business at my bowl.”
— When the player is making their way to Gerald's apartment.

Arriving at the weed farm in Cypress Flats.

Taking out members of the Lost outside the farm.

Entering the farm and taking out the Lost.

Engaging in a shootout with members of the Lost MC at their warehouse in El Burro Heights.

Taking out more members of the Lost.

Arriving at the meth lab in Downtown Vinewood.

A shootout between the players and the Lost.

Launching an assault on the cocaine lockup in Vespucci Canals.

Taking out a Lost member in the lockup. 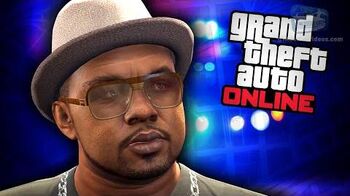