In-game time
“I just eavesdropped on a very interesting conversation. That diamond store that got hit last week? The ice is in a helicopter in a rooftop in Del Perro ready to be moved out to the East Coast. They'll have muscle so you'd better tag-team this - put someone on a nearby roof with firepower while the other moves in for the cargo. I wouldn't normally poach, but this crew are idiots ;) Meet me back at the warehouse.”
— Description

Last Chopper Outta LS is a mission in Grand Theft Auto Online given to the player by Lester Crest. It is available only with 2 players.

A jewelry store was robbed and the men who robbed the store are taking the diamonds to the east coast. The chopper is ready to go and is landed on the roof from the house in Del Perro. The team needs to reach the roof by using the stairs. There will be several men protecting the chopper from being stolen in a large series from rooftops. Once the team steals the chopper, one more rival chopper will come after the team. Simply escaping from the rival chopper, the team needs now to land the chopper at Lester's warehouse in Murrieta Heights. After landing it, Lester will despairingly text the player to warn that the rival's crew is coming to Lester's warehouse to get the chopper with the diamonds back. After the team kills them all, the mission is accomplished. 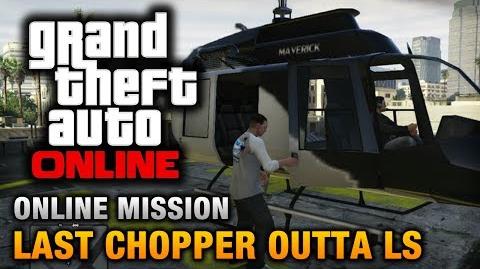