It is located at the northeastern end of the city, in the Roca Escalante district. The complex consists of a large main building consisting of a main glass office tower and two leading sections, one of which holds a secondary entrance to the building. Like various other buildings in Las Venturas, the police station is surrounded by palm trees and decorations. It can be distinguished by its large sloped entrance which leads down to the underground garage. Signs for the "San Andreas Police Department" are found on both main entrances as well as the parking lot entrance. On the opposite corner, the building's side walls open up to reveal the building's main parking lot, which has a barrier entrance at street level. 4 American flags hang on the side of the building. Another SAPD sign is found on the corner as well as on the top corner side of the building above the parking lot.

The station has automated garage doors and an automated barrier, limiting access to the player. An exterior barrier allow access to the exterior parking area as well as the upper level of the parking garage, but only to police vehicles. The barriers will no longer open if the player is spotted in the parking area by guarding police officers. As well as the main entrance barrier, two garage doors allow access to the underground parking garages. The first one, within the exterior grounds, leads down to the bottom floor of the parking garage. This will only open to police vehicles from the outside, but will open from the inside regardless of what vehicle the player is in, even if the player has been spotted by the garage controller, located next to the door. The second garage door is on street level at the front of the building, notable by its curved shape as it descends to the door itself. This door will not open from the outside, regardless of what vehicle is used, however it will open from the inside to any vehicle. The garages also have an alarm system, like the San Fierro Police Headquarters and Los Santos Police Headquarters. This alarm system will sound shortly after a police officer has called for backup when spotted inside the garage area. When sounded, all responding police officers will aim and shoot at the player. The alarm sound is a traditional low-pitch bell.[6]

Several police cars will spawn inside the station garage. Two are scripted to spawn on the upper floor; one locked, and the other unlocked. There are also two scripted to spawn parked on the lower level; one locked and one unlocked, while other police cars randomly spawn in various places on both levels of the garage. Police cars can also spawn behind the entrance. Random police cars will be either locked or fitted with an alarm, unique to this station. A police officer can be seen entering the unlocked police car and driving up to the barrier entrance before stopping. Two police officers can be found inside the locked police car, ready to get out of the car. Also in the underground parking lot are up to four "impounded" cars at the bottom level. These appear to be glitched as they are completely random, allowing even planes, boats and helicopters to spawn.

In total, 6 police officers will spawn around the parking areas of the station. 2 can be found in the exterior parking lot at the rear side of the building, while 4 are found inside the underground garage itself. If police officers inside the garages or around the parking lot exterior spot the player inside the station grounds, they will aim at the player while calling for backup, before a 3 star wanted level is attained. If the player kills officers before they are able to spot the player, they will not receive a wanted level. When the officer calls for backup, they will shout "officer in need of back up", and will have the same voice as one of the 5 LSPD police officer voices, meaning the same audio file will be played regardless of which voice they use normally.[7]

The LVPD station's garage and parking lots have both vehicle and ped paths, allowing police officers and police vehicles to spawn within the station grounds at a 3 star wanted level. This is unique to this station, although the LSPD station has vehicle paths.

The player will respawn outside the second entrance when they are arrested in Las Venturas.

The station's interior can be accessed from a corona at each of the station's entrances; one from street level and one from the second entrance where the player respawns outside after being busted (including after failing the mission Architectural Espionage due to refusing to put the weapons away when a security guard spots the situation and photographing the blueprints before causing the distraction).

The interior consists of 2 levels. When entering from the bottom door at street level, the player will spawn at the first floor, while entering the second door (where the player respawns outside of after being busted) leads to the second floor. Throughout the interior, police officers and prisoners may randomly spawn. Police officers can be found looking at noticeboards on the wall or crouching down while looking inside a cabinet. Prisoners may be seen talking, smoking or even fighting with other prisoners.

The main entrance, split between the floors, is a large, open, empty space with grey walls and a blue floor. Chairs are found along the walls and the main reception desk is marked with signs, in a wooden booth in the corner. Between the two floors, the stairway is found adjacent to a large display with rocks and foliage within a curved bed. The stairs lead down to the first level.

The first level of the station consists of several rooms, one of which has a police officer reaching into a cabinet, and another room with a police officer looking at a board. A large waiting room with drinks machines is split between the corridors, one of which leading to the prison cells. Before reaching the prison cells, an Administration room is full of computer desks and cabinets. The prison room consists of several cells as well as an office with a desk and a whiteboard on the wall. The briefing and commander rooms are also found within the same area.

The second level is distinguished by the green/blue carpet and slightly greener walls. It holds the permits and licensing department as well as a large computer office room. There are several weapon pickups in the corridor as well as an armor pickup.

As well as the randomly spawning police officers and prisoners, random civilians may spawn inside the interior, interacting in a similar manner to the police officers, but generally stick to walking around the interior. The player will be given a two-star wanted level if they wield any firearms or explosives inside the station, but are otherwise free to explore the station. 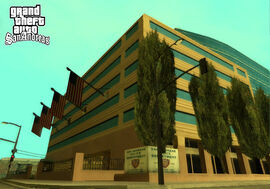 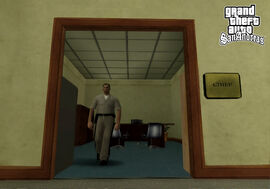 A policeman in the Las Venturas Police Department's screenshot.
Add a photo to this gallery

Another view of the station.

The door leading to the parking area.

Rear view of the station.

Nightstick behind the sign.
Add a photo to this gallery
Interior

Stairways leading down to the lower level.

Lower level of the station.

Waiting room on the lower level.

Rooms near the prison cells.

The cells, with a nightstick in view.

Retrieved from "https://gta.fandom.com/wiki/Las_Venturas_Police_Headquarters?oldid=1148545"
Community content is available under CC-BY-SA unless otherwise noted.