“The original Landstalker implied one of two things. You were a drug dealer, or you were a trophy wife. Now the massive Landstalker XL implies you're both.”

The Dundreary Landstalker XL is a full-size SUV featured in Grand Theft Auto Online as part of the Los Santos Summer Special update.

The vehicle is a newer iteration of the Landstalker, which inherits the general SUV design, but modernised. The front end is mostly dominated by the rectangle-shaped grille with three horizontal bars and a manufacturer's badge, along with a set of circular headlights with square-shaped lamps below these. On the lower area, a set of intakes can be seen spanning the front's width, as well as a defense panel protecting the front. The hood follows a similar shape to the one on the Landstalker.

The sides of the car are distinguished by the detail on the front fenders displaying the car's name and a line detail on the lower sides, as well as the black stepsides. The greenhouse area is predominated by the plastic trim around the windows, half-colored rear-view mirrors, and a distinctive panoramic roof, allowing a view of the sky in first person, best seen from the rear seats. Two plastic strips run towards the rear of the roof, along with a single vortex generator.

The rear of the car features large tail lights on either side, a red stripe connecting both tail lights and the manufacturer badge on the center, along with the "DUNDREARY" and "LANDSTALKER XL" badges at the bottom of the rear compartment door.

The interior of the car reuses the same "Cavalcade" interior and dials from the Landstalker, as well as many other SUVs.

The car is prominently painted in a primary color, while the front bumper panel, grille, side trim, mirror shells, door handles, rear detail and the upper surface of the rear bumper are painted in a secondary color (set to Chrome in all possible color sets when spawned through the Content Creator). The vehicle shares the same rim design as the Rebla GTS.

The Landstalker XL is average overall, which makes it more of a cruiser than a competitive racer. Its speed and acceleration are average, but it has great durability against collisions and gunfire because of its strong bodywork. It also handles fairly well in off-road environments, thanks to its ride height. Despite being heavy, it has a small turning radius. 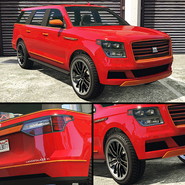 The Landstalker XL in the cinematic preview on Rockstar Games Social Club.