GTA IV & TLAD
TBOGT
“The Dundreary Landstalker is a full-size luxury SUV driven by people you assume must be drug dealers or trophy wives, because that's easier than dealing with the very real possibility that they might just be more attractive and successful than you are.”
— Southern San Andreas Super Autos description.

The Grand Theft Auto IV rendition of the Landstalker bears close resemblance to the Third generation Ford Expedition, in its overall shape, though analogous to the comparisons between Dundreary and Lincoln, it may be intended as an equivalent to the third generation Lincoln Navigator. The headlights resemble those of the 2006–present Range Rover or Lincoln Navigator and the tail lights appear to share similar traits of those on the 2006 Ford Explorer/Range Rover Sport. It also bears a resemblance to the 2008 Ford Flex, however, this is most likely coincidental, as the Ford Flex was released at almost exactly the same time as Grand Theft Auto IV.

The Landstalker inherits the overall profile and design cues from the Grand Theft Auto: Liberty City Stories rendition, but leaning towards a luxury vehicle, featuring a bulky bumper with large intakes and a set of unusable circular lamps. The headlights mainly consist of large inner lamps and small outer lamps, with the upper small ones being turn signals. A grille with two horizontal bars can be seen between the headlights, with the manufacturer's emblem on the center.

The sides of the car feature stepsides below the chromed strips, followed by the chrome lettering on the front doors displaying its name. The greenhouse is mostly opaque, featuring tinted windows separated by black pillars, although the A-pillars are colored and the lower side is occupied by chrome trims, as well as two black rear-view mirrors. The roof has two black strips running towards the rear.

The rear end is predominated by the rear compartment, featuring a chrome strip above the license plate, the manufacturer emblem between the the window and the aforementioned strip, and the chrome letterings on the lower side, displaying the car's manufacturer and name. A set of circular and rectangular tail lights can be seen on either side, located in chrome housings. Its lower half is protected by another bulky bumper, with lower mouldings for the exhausts.

The car is normally set to spawn in a single color, and may spawn with a set of roof racks and TV screens on the front headrests. It uses 6-spoke wheels wrapped in high-profile tires.

The Landstalker is equipped with a GPS system with a male voice, but only if the player leaves the "selected cars" (default) option in the audio menu.

The Landstalker in Grand Theft Auto V and Grand Theft Auto Online retained the overall shape of its previous iteration, but has a few subtle changes. A front license plate is added and the front seats sit much lower, resulting in a large amount of head-space above the front occupants. The roof racks are no longer standard, but can be added at Los Santos Customs.

The car may spawn with a two-tone color, where the secondary one is applied on the lower side. Its wheels retain the same rim design, which looks similar to the "Challenger" off-road wheels available in Los Santos Customs.

The Landstalker has a light weight (1380kg), a short wheelbase, high ground clearance, full-time 4WD, great grip, making for what seems at first to be a good off-road vehicle. However, the car is anything but; its performance almost ruined by monstrously stiff suspensions with little give, meaning instead of simply inducing body roll, turning causes the entire vehicle to tip over. Attempting to off-road with the vehicle can often lead to nasty surprises, as hitting the slightest bump will often send the car into the air, due to the stiff suspension being very bouncy. The vehicle also has a hard time transferring its traction to the ground, as the car tends to continue bouncing a few times, after hitting even mediocre bumps, like curbs and rocks. These attributes make the vehicle vastly inferior as an off-road vehicle when compared to the Patriot, Rancher, Sandking and Huntley. Although its handling is poor, the Landstalker has all-round moderate-to-good acceleration and top speed due to its weight.

The Grand Theft Auto: Liberty City Stories rendition is noticeably more stable—its redesigned body features a lowered ground clearance (resulting in a slight redistribution of weight to the bottom) and a longer, heavier body (1880 kg), reducing the likelihood of rollovers. This is decidedly not the case with the version used in Grand Theft Auto: Vice City Stories, which has some of the poorest handling and highest likelihood of rollovers of any car in the 3D Universe, especially when attempting VCS' Robbery missions.

In Grand Theft Auto: San Andreas, due to the vehicle's suspension, the car seems hard to control upon landing even the slightest jump, making the car seemingly perform a wheelie, but this could also be due to the configuration of the vehicle. However, it is the fourth most resistant vehicle, as seen in the stats.

The Grand Theft Auto IV rendition of the Landstalker is quite heavy, resulting in poor acceleration and decent top speed, and compared to other SUVs; braking is also adversely affected by the weight. The suspension is moderately firm, but still far too soft to corner at speed effectively. The body flops about in the turns, often causing the rear end to kick out and fishtail rather than simply overturn as in previous games. On the road, the Landstalker is nowhere near as competent as its closest competitors (the Cavalcade and Huntley Sport), but off-road, the Landstalker begins to show its usefulness. The engine has enough torque to allow scaling of medium-grade hills, and the suspension evens out most of the natural bumps; unfortunately, the long rear overhang means the Landstalker can beach itself on rocks. Overall, its off-road performance is inferior to that of the Cavalcade, however it fares better than the Huntley Sport.

Deformation in frontal accidents is very good, having able to retain both headlights after hitting a low car. Rear accidents though cause quite a bit of visible damage. The engine itself is sturdy in accidents, allowing the Landstalker to take multiple direct hits at full speed before failing. Overall, this vehicle is better suited for short drives and off-road expeditions than high-speed pursuits.

The engine is a large displacement V8, paired to a 5-speed gearbox in a 50% Front, 50% Rear 4WD layout. Its engine sound is shared with that of lighter SUVs such as the Habanero and the Rebla.

Rear view of the Landstalker in the iOS version of GTA Vice City (notice the "4X4 POWER" rear wheel cover which is not seen in the original version).

Niko standing in front of a destroyed Landstalker in a pre-release screenshot of GTA IV.

A Landstalker in Los Santos Customs. 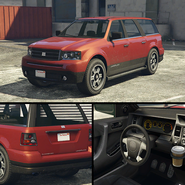 The Landstalker on the Rockstar Games Social Club.

The Landstalker on the updated Rockstar Games Social Club.

The Landstalker in a Cinematic preview on Rockstar Games Social Club. 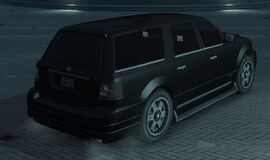 Rear quarter view of the modified variant in GTA IV, with headrest-mounted televisions, larger step bars and no luggage rails. 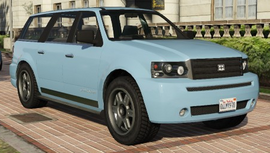 The Landstalker owned by The Epsilon Program (Rear quarter view).