Lance is a cocaine dealer who worked in the cocaine trade with his older brother, Victor Vance (the protagonist of Grand Theft Auto: Vice City Stories). Lance piloted the helicopter and Vic conducted the deals themselves. The two are the main members of the Vance Crime Family, with Vic as the boss.

In GTA Vice City, he is always seen wearing a white soiree suit with a purple shirt. His artwork shows him wearing a light-purple suit. In GTA Vice City Stories, his outfit changes from a red shirt with jeans to a double breasted cyan suit.

“Aunt Enid raised us, not you.”
— Lance to his mother

Lance Vance was born to a white mother, Janet Vance, and his father immigrated from the Dominican Republic.

He and his two brothers, Victor and Pete, grew up in poverty. Because their mother had a drug addiction, they were raised by their Aunt Enid who they, especially Lance, see as their sole maternal figure. Lance was often teased about his name in school, which he is still very sensitive about (when he works with Ricardo Diaz, he lies and says that his name is Quentin). During the mission Phnom Penh '86, Tommy Vercetti jokingly laughs at Lance, teasing "Vance? Your name's Lance Vance?!" and then "Lance Vance. Poor bastard." According to Vic, he got them kicked out of the Boy Scouts in his youth. Vic always treated Lance like a little kid and Lance would get them both in trouble, patterns that continued well into their adult lives.

In Grand Theft Auto: Vice City Stories, set two years before the events of GTA Vice City, Lance is first mentioned by Vic (telling his sergeant that Pete is sick with asthma, and Lance is sick in a psychological way, as well as messages from their Aunt Enid).

Lance arrives from his home and slowly ushers Vic into drug trafficking. They work with Bryan Forbes, before he reveals he's an undercover cop with VCPD and the brothers take him hostage. Forbes often attempted escape and tried to trick the brothers, even leading them to a gay bar called White Stallionz.

Working for The Mendez Cartel

Lance then suggests stealing a large shipment of drugs from Jerry Martinez. After Vic calls Jerry to mock him, Jerry reveals that he was allied with the Mendez Brothers, two powerful drug lords who were now out for the Vance's blood.

Lance also becomes addicted to his own cocaine, as does Vic's girlfriend Louise Cassidy-Williams who both hide their habit from Vic. Lance often blamed the missing drugs on their addict mother or a biker gang. Vic finds out and first accuses them of an affair, which they respond that they only get high as friends and call him judgmental (a criticism Vic often receives).

When Louise is kidnapped and eventually killed by the Mendez brothers (who they briefly made peace with before a second war), Lance shows little feelings for her and tries to console Vic by saying family is more important (namely, himself). He only becomes involved with the Mendez war after his car gets destroyed.

In a final stand-off, Victor manages to kill both Diego and Martinez, thus winning the battle and getting his revenge. Shortly after the end of the battle, Victor's brother Lance arrives in a black and yellow Maverick supposedly coming to help him; however, as the battle has already ended, Victor and Lance agree to lay low for a while and get out of town. Lance offers Victor twenty kilos of cocaine for a deal ahead; however, Victor denies his interests and says that he doesn't ever want to touch drugs again, and then says that he sends some money to his sick brother, Pete, for the medical treatment required.

In 1986, Lance flies Victor to a cocaine deal with Sonny Forelli's men when Victor is shot by a third party ambushing the deal. Lance, still in the helicopter, flies away unscathed.

Friendship with Tommy and revenge on Diaz

“Oh, way to go, tough guy. Beat him to a pulp. That should make him real chatty.”
— Lance to Tommy

Lance meets Tommy Vercetti, the surviving Forelli mobster from the deal, when he kills Leo Teal (a cook/hitman) who knew something about the deal, silenced when Tommy beat him to death). They agree to help each other get revenge, though Tommy is slowly beginning to accept Lance.

“This is for my brother!”
— Lance to Diaz

Lance on the surface appears cool and collected, but he is very impulsive. His quest for vengeance against Ricardo Diaz, the boss who betrayed them in the first place, results in his capture and torture by Diaz's men, and he is only saved from death in the nick of time by Tommy. Tommy had risked his own life to save Lance's fighting through a swarm of Diaz's men. Lance redeems himself by supplying the M4 Carbines to Tommy, the two of them use to finish off Diaz and his Colombian gang.

While and after the two of them overthrew Ricardo Diaz, Lance complains about being treated like a little kid (such as after Cop Land) and becomes irritated by Tommy's attitude and dominance in the gang. The only time Tommy however shouts of at Lance is during the cut scene of the mission Bar Brawl for his mistake. Tommy never told Lance to not establish himself while Tommy built his empire, but all Lance did was complain and expect everything to be handed to him. Shortly before Sonny Forelli's arrival, Tommy declares the Vercetti business is "my operation mine", implying that he views the criminal enterprise as a sole proprietorship rather than a partnership, as he did all the hard work in purchasing and establishing his assets and raising his gang while Lance just complained, and this was perhaps the last straw for Lance.

“Sorry Tommy. This is Vice City. This is business.”
— Lance betraying Tommy

Eventually, Lance betrays Tommy to his old boss, Sonny Forelli, revealing that the cash payment was counterfeit, which prompts Sonny to come prepared bringing a large number of gunmen to the Vercetti Estate.

Lance: "No one to cover your ass now, eh Tommy?"
Tommy: "You're going down, you backstabbing prick!"
Lance: "Oh, you think so?"
—Tommy and Lance about to fight against each other

Tommy: "Come here, you double-crossing piece of shit!"
Lance: "You're history, Tommy, history!"
―Tommy and Lance, as the former chases the latter to the top of the mansion

Tommy: "This is the last dance for Lance Vance!"
Lance: "I said I had ENOUGH of that at school!"
―Tommy and Lance during their shoot-out

“You picked the wrong side, Lance...”
— Tommy Vercetti, upon killing Lance

In the ensuing gunfight, Tommy confronts and kills Lance on the roof of the mansion. Having killed the remaining Forelli henchmen in the process, Tommy proceeds to kill Sonny and cement his power in Vice City once and for all.

Lance can be seen as an action figure in Zero RC along with Tommy, James Earl Cash, and Piggsy, the latter two from Manhunt, in Grand Theft Auto: San Andreas, circa 1992. A billboard depicting a character using his model (with the face model of Cam Jones) can be found around the state. His character art can also be seen on the Jack of Spades card while playing Poker in Las Venturas

In a PC World article, Lance was voted as #17 of the top 47 "most diabolical videogame villains of all time."

Lance is a well-dressed 32-year-old transient, just recently arrived to Vice City with his brother who got popped during Sonny Forelli's drug deal that went bad while under Tommy Vercetti's supervision. Now fighting alongside Tommy, Lance will stop at nothing to avenge his brother's death, no matter who steps up to the plate.

Recently arrived in town with his brother. Asks a lot of questions. Trained helicopter pilot. Believed to be in narcotics trade. 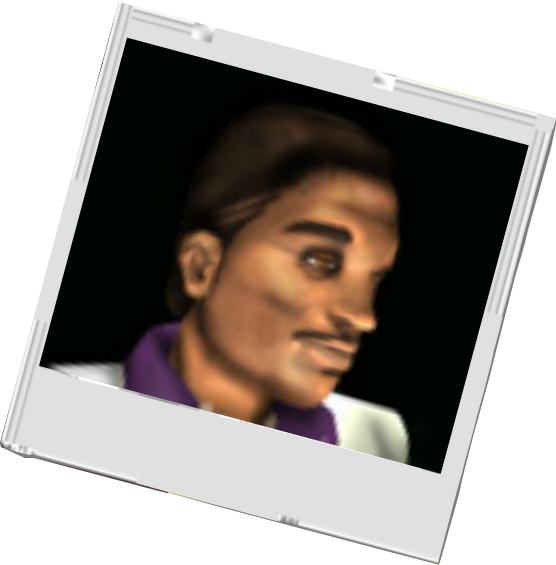 GTA VCS Artwork of Lance and his brother Victor.

Lance as he appears in the original Grand Theft Auto: Vice City (2002).

Lance during Keep Your Friends Close... in GTA Vice City - The Definitive Edition

Lance Vance in the Definitive Edition.

Lance Vance's appearance during the first half of GTA Vice City Stories.

Lance during much of the game's second half, wearing a bright blue suit, chain necklace and lacking glasses, similar to his appearance in GTA Vice City.

Lance and Tommy about to kill Ricardo Diaz in Rub Out.

Tommy Vercetti and Lance Vance in a screenshot from Grand Theft Auto: The Trilogy - The Definitive Edition.