Maserati
“An Italian luxury car company founded in Bologna at the beginning of the 20th century that focused on racing cars. Having failed to win many Grand Prix, they focused on making sports cars that impress vapid women. They've done this exceptionally well.”

Lampadati, according to Southern San Andreas Super Autos, was founded in Bologna at the beginning of the 20th century, much like Maserati was. The name means "tanned with a sun lamp" in Italian.

The logo of Lampadati consists of a peacock, which bears some similarity to the silhouette of the Maserati trident. The Michelli GT includes a colored version of the Peacock logo, this version of the logo has green and blue feathers, and a white beak.

The company appear to have a slightly unofficial connection with Ocelot, as some of their cars share design manufacturers, for example the F620, Felon and Felon GT have influences of vehicles manufactured from both Maserati and Jaguar.

The name and branding appears to be based mainly on the Italian car manufacturer Maserati. Along with Maserati, the Lampadati brand also draws inspiration from other Italian manufacturers, such as Alfa Romeo, Lancia and De Tomaso. In fact, the blue and green badge may be based on that of Alfa Romeo, due to the matching colours and the fact it was first introduced with the Michelli GT, an Alfa Romeo based car. 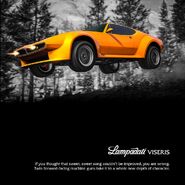 Advertisement for the Novak.

Poster of the Lampadati Casco in Amalfi, Italy.

The Pigalle Racing Jacket seems to be based on Burt Reynolds' "Bandit" jackets from Smokey and the Bandit 2.