“Wonderful wildlife haven to some, mosquito-infested swamp to others, you'll either love or hate the Lago Zancudo wetlands.”
— GTA V manual.

Lago Zancudo, which translates as Mosquito Lake, is an undeveloped area located in Blaine County in the state of San Andreas within Grand Theft Auto V and Grand Theft Auto Online. Its slogan is "Bringing a Taste of Mexico to the U.S.A."

According to the information board of the Fellowship of Zancudo Wildlife Trust, it was gifted to the State of San Andreas in 1941, and it was formerly a jetty used by locals for trading. Since that time, the area has been transformed back to its original wild status, thereby benefitting the local wildlife and enriching the lives of the thousands of visitors every year.

Lago Zancudo is wetland terrain covered with bogs and trees. The Zancudo River runs through it. It borders Fort Zancudo, and is home to wildlife such as birds and deer. The only manmade objects include an old shack where a Blazer spawns in single player, the bridge from the Great Ocean Highway, and a RON gas station with a non-enterable 24/7.

A letter scrap can be found here, specifically on the side of the river closest to Fort Zancudo. 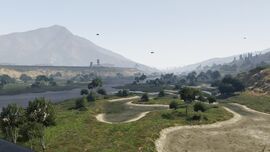 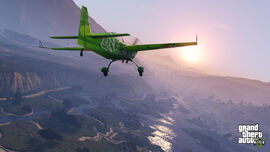 Lago Zancudo as seen from a Mallard. 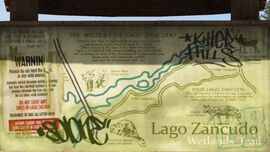