• ­The suspected kidnapper is near Meadows Park.

• ­Now take the chopper back to the helipad.

Ladies' Night is a mission in The Ballad of Gay Tony, given by Gay Tony to Luis Fernando Lopez.

You meet Gay Tony who tells you that Gracie has been kidnapped by some Irish goons and some guy who came to look at her pink Feltzer. Her father believes that Gay Tony is to blame for this so Tony insists that they go look for her. After the cutscene ends, go to the helipad and use the Ancelotti's helicopter to look for her. Gay Tony tells the location of the last known location of the kidnapper and you have to follow him to her location. You find out where she is kept and Gay Tony texts her location to Don Ancelotti, who sends out thugs to get her back at the start of She's a Keeper.

Complete the mission in under 8:50
Have 0% helicopter damage
Stay close to Patrick's Comet
Stay low, but at a reasonable altitude above Patrick's Comet

Get to the Alderney Heliport to get to Meadows Park. You'll see the kidnapper getting in a red Comet. Follow him to Gracie's location, and keep a low altitude. The kidnapper will go to Charge Island, driving to Algonquin and circling Middle Park, then he will put down the pedal on Columbus Avenue to the skyscrapers of Star Junction making it quite difficult to have a low altitude. He'll then go through the Booth Tunnel, He has two exits, so go back to the Helipad where you picked up the chopper. In Alderney, the kidnapper will stop in a large car park, forcing you to stop and wait. He will then go to the safehouse where Gracie is. While Tony is texting Gracie's father, get back to the Helipad. 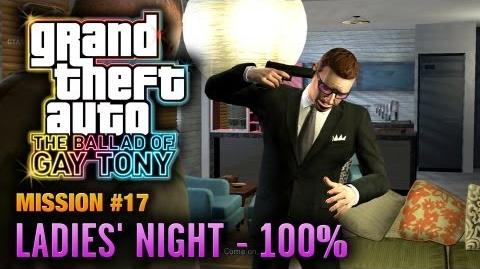 Retrieved from "https://gta.fandom.com/wiki/Ladies%27_Night?oldid=1288162"
Community content is available under CC-BY-SA unless otherwise noted.