"I'm really famous. I didn't do anything!"
―Lacey Jonas

Lacey Jonas is very famous for her work in high school movies. She is full of herself, seeing herself as a role model for teenagers. She is very image-conscious, to the point of exiling herself from her parents and spending a lot of money on voice coaching to help her lose her regional accent. The media and her fans are also extremely obsessed about her, with Lacey claiming that one photo of her can reach a six-figure price and that the autobiography of her gynecologist was the best selling fiction and non-fiction book of 2010. Lacey says that she has so many fans that "they could fill the entire country of Africa", including one fan who sent his own junk to her in a box.

It is clear from the conversation with the protagonist during the random event that Lacey is anorexic. She believes that she is 'fat' and blames it on French fries. According to Jonas, she would only suck on the French fries but that even doing that would equate to 100 calories. The media satirize her over this, dubbing her 'Emacy Jonas' (a play on 'emaciated'), referring to her as a "skeleton" and writing "give that girl a sandwich". Sightseeing and Celebrity on the GTA V website claims that Jonas is an "All-American romcom starlet" and heated rival of Poppy Mitchell.

Her in-game face model is also used for Kerry McIntosh in GTA V and is also shared by certain NPCs who can be found around the rich parts of Los Santos, notably the cashier in SubUrban who has a speaking role in Friend Request.

Lacey Jonas can be found hiding from the paparazzi in an alleyway in Downtown Vinewood. When she is found by the player, she asks you to drive her home. She requests that the protagonist doesn't kill any of the photographers, since doing so will bring negative attention towards her.

While trying to avoid the paparazzi, Lacey will reveal who she is and each of the protagonists have a different reaction:

If the player travels to her location without a car and tries to steal one of the bikes, the random event will end (will not be counted as completed) and members of the paparazzi may confuse the player (depending on who) with a celebrity (the celebrity may differ):

The player can also take her to the Altruist Cult if playing as Trevor, but her death is confirmed not to be canon as she makes a appearance in Grand Theft Auto Online as part of the After Hours DLC, which takes place 5 years after the events of GTA V.

In Grand Theft Auto Online, Lacey Jonas can be picked up by the GTA Online Protagonist and they must take her to their Nightclubs while driving the Patriot Stretch during one of the Nightclub missions.

In another Nightclub promotion mission, Lazlow tips the player off that she has just been arrested and they must rescue her from the police and deliver her to their Nightclub in a Police Transporter.

Lacey during the random event in GTA V. 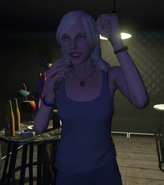 Lacey Jonas as she appears in the GTA Online: After Hours update.
Add a photo to this gallery

"Even if we accept plaintiffs’ contentions that the video game depictions are close enough to be considered representations of the respective plaintiffs, plaintiffs’ claims should be dismissed because this video game does not fall under the statutory definitions of “advertising” or “trade.”… This video game’s unique story, characters, dialogue, and environment, combined with the player’s ability to choose how to proceed in the game, render it a work of fiction and satire."
— {abridged}[5]

Retrieved from "https://gta.fandom.com/wiki/Lacey_Jonas?oldid=1085365"
Community content is available under CC-BY-SA unless otherwise noted.