Location on the map (in-game GPS). The Maze Bank Arena is considered a neighborhood of La Puerta.

“A community with strong roots in the fishing and longshoring industry, La Puerta, like so many other proud blue-collar neighborhoods, survived unchanged for hundreds of years until it was infiltrated by hipsters who sneaked in disguised as them and started drinking in their dive bars.”
— GTA V digital manual

It is bordered by Los Santos International Airport and Banning to the south, Vespucci to the west, Davis to the east, and Little Seoul, Strawberry, and Chamberlain Hills to the north.

La Puerta was primarily an industrial area, characterised by run-down, decrepit buildings and shops. There are several warehouses located towards the northern side of La Puerta; these warehouses serve little function anymore and are just a centre for gang activity. The southern end of La Puerta is much more crowded because of the presence of the Maze Bank Arena and the highways that lead to the city airport.

Due to its location, drivers leaving the Los Santos International Airport vicinity will pass through La Puerta first before venturing to the rest of the city.

La Puerta is mostly based on Long Beach and San Pedro, California, neighbourhoods in the port district of Los Angeles. However, the area also contains the Maze Bank Arena whose real life equivalent is located in Inglewood of South Los Angeles. In-game, La Puerta is adjacent to the separate area of Port of Los Santos, which is incorporated into San Pedro in real life. 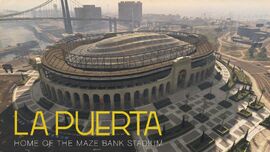 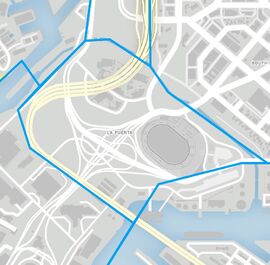 La Puerta on the map.