The Los Santos Benders are a soccer team based in Los Santos in Grand Theft Auto V.

The Los Santos Benders are based on the Los Angeles Galaxy, a professional soccer team in Los Angeles; the logo for the Benders is loosely based on that of the Galaxy (using a shield design).

The team has its own radio commercials and sells season tickets for $50 (though they cannot be purchased by the player). It tries to attract attention to soccer by letting visitors catch up with "European-style chanting" (which are actually blatant insults targeted at the opposing team) and to give them the opportunity to commit hate crimes, get into post-game riots, violent fights between team supporters and to experience the "joys of mass hatred, xenophobia and alcohol abuse", parodying the behavior of most British and European soccer fanbases (especially from the 1970s to the 1990s), while also referencing the American supporter groups whom try to mimic this behavior.

Imaging Voice: "You love sports. But isn't it time to forget about friendly rivalries, tailgate parties and marching bands? It's time America joined the rest of the world!"

Crowd (with British accent): "Who's the wanker in the black?"

Imaging Voice: "Embrace the global passion of soccer at the next Los Santos Benders home game! Let off flares, riot, and commit race crimes, just like the sophisticated Europeans do!"

Imaging Voice: "Come feel the excitement of a Benders home game, where a normal post-game melee may result in a couple of burnt cars! A proper English riot can burn a town to shreds! It's time America finally joined in on the fun! The LS Benders! Season tickets only $50."

Crowd: "Who's the wanker in the black?"

Imaging Voice: "Uhh... Boring! Isn't it time you embraced the witt and vitality of European-style chanting? Only at the next LS Benders home game!"

Crowd (with British accent): "You're gonna get your fucking head kicked in!"

Imaging Voice: "It's cultured! It's fun for the whole family! And it's finally over here!"

Imaging Voice: "We Americans are such philistines. We haven't understood the cultural significance of mass hatred, xenophobia, and alcohol abuse! Well, soccer in the U.S. is no longer for housewives! Now, it's for everyone! Come see the sport that until now America couldn't get its head around, because it's not 75% commercials! The LS Benders: Season tickets only $50!"

Crowd: "You're gonna get your fucking head kicked in!" 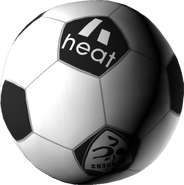 A Heat Soccer ball with LS Benders print.
Add a photo to this gallery

Retrieved from "https://gta.fandom.com/wiki/LS_Benders?oldid=1219029"
Community content is available under CC-BY-SA unless otherwise noted.