It is the first large-scale military ship to physically appear in a Grand Theft Auto game and is located at the Easter Basin Naval Station in Easter Basin, San Fierro. The ship carries a number of Hydras.

Accessible areas aboard LHD-069 include the flight deck and two internal decks. Players do not have access to interiors of the upper levels of the ship's superstructure.

The flight deck is actually capable of functioning as a short takeoff and landing strip for nearly any plane. In addition to the superstructure, two SAM sites which are only active during Vertical Bird are installed there, while a Hydra will also spawn occasionally at the same level after completion of the mission.

The internal decks resemble warehouses, with crates and explosive military armaments (which obviously explode when shot at, similar to explosive barrels) scattered and stacked around the area. Large loading bays on the upper deck and an amphibious vessel wet dock in the lower deck are also incorporated into the ship, although it is only during Vertical Bird that both the loading bays are functional and the wet dock rear door is opened.

LHD-069 is modeled after the real-life US Navy Wasp class amphibious assault ship. It was first commissioned in 1989 and also uses an "LHD-x" classification to identify multiple Wasp class ships. As only eight Wasp class ships (numbered LHD-1 to LHD-8) were built, "LHD-069" is clearly a non-existent designation, with the "069" numbering deliberately selected as a running gag.

During the mission Vertical Bird, Carl Johnson infiltrates the ship on Mike Toreno's orders, in order to steal a Hydra VTOL jet and use it to destroy a flotilla of Tropic spy ships in the Sherman Reservoir. This is the only time military personnel is present on board and the ship's SAM sites are active, as well as the ship's rear door and loading bays. 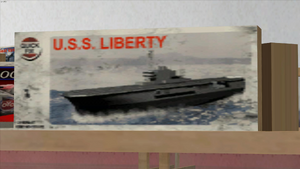 The model of the ship inside Zero RC shop.
Add a photo to this gallery

Retrieved from "https://gta.fandom.com/wiki/LHD-069?oldid=1165048"
Community content is available under CC-BY-SA unless otherwise noted.