Standard White - 100%
“One moment you're on the runway slowly inching into position, wondering what all the fuss was about. The next, you're 200 feet in the air and rising, a shrieking human speck on the front end of a blazing rocket trail making straight for the stratosphere. Why are you doing this? How do you get down? What happens if you start crapping out heavy munitions at this speed? Honestly, we're hoping you tell us.
Please note: This aircraft is excluded from Pegasus Lifestyle Management and must be stored in a personal hangar.
”
— Warstock Cache & Carry description.

The LF-22 Starling is a rocket plane featured in Grand Theft Auto Online as part of the Smuggler's Run update.

The LF-22 Starling is a compact fighter plane closely based on the Messerschmitt Me 163 Komet, evident by the overall design, the rocket engine mounted in the rear and the propeller on the front that is most likely attached to an emergency generator similar to that used on its inspiration. The cruciform tail setup appears to be similar to that of the Messerschmitt Me 262, but retaining the vertical stabilizer shape of the aforementioned Me 163 (with the rudder mounted over the stabilizer rather than from the rear side). The machine guns positioning appear to be similar to that of the Mitsubishi J8M.

The aircraft is depicted with a relatively small fuselage, wide wingspan and an unusual undercarriage, where the front section features a small four-bladed propeller that works when the aircraft is moving and a cone-shaped nose, as well as a framed canopy that swings forward for access and a single main gear wheel below. The main section consists of the main wings with inner air brakes and outer ailerons, along with small hatches on the underside for the bomb bay. The rear/tail section is rather short and features the corresponding stabilizers, the single rocket turbine exit and the tail landing undercarriage.

The interior features a unique worn instrument panel with black and yellow dials, as well as a targeting sight which can be used in first person, an alternative to the digital targeting reticules present on modern aircraft. Said targeting reticule seems to be brighter during night time.

The primary colour is applied on the upper side of the body and the tail, while the secondary colour is applier on the lower side, lower surfaces of the wings, wing tips, propeller spinner, and the inside of the canopy frames. It uses a set of plain industrial wheels similar to the ones from aircraft such as the Titan, the Savage and the Hydra.

The vehicle is armed with a set of machine guns on the wings. It can be also modified with missile launchers, consisting of three tubes with rockets inside, as well as bombs.

The Starling's performance is similar to that of a modern-day fighter jet, as opposed to its real-life intention. The plane's small, compact design also makes it very easy to handle, almost too easy - the pitch remains stable, but rolling the plane can sometimes result in overestimating the amount of roll needed to perform a turn, in a similar way to the Howard NX-25's roll and pitch behavior. Speed-wise, the plane is considerably sluggish without its Booster ability, but with correct usage, it can easily be one of the best performing planes in the game.

At 8100 FT/2400 M (maximum altitude) the Starling can glide a distance of approximately 9.5 Mi/16 KM (from Paleto Bay to LSIA and halfway back again landing somewhere in the Zancudo region) with its engines off.

Because of the unusual undercarriage setup, landing the plane is often tricky, as the plane tends to bounce excessively at a steep pitch angle, therefore requiring a flat surface and level the plane carefully. Similarly, the plane is very sensible to uneven terrain; since the undercarriage setup forces the plane to always stay balanced, going onto uneven terrain may result in a variable wobbly behaviour, being susceptible to hit the ground constantly or getting stuck with an obstacle.

The aircraft is powered by a single rocket engine, which produces a somewhat quieter sound compared to most fighter jets (if the booster is not used). The engine start-up sound is also different, being a click sound from an ignition button located on the instrument panel.

The LF-22 Starling sports a rocket booster on the rear, which can be used for both take-offs and cruising flight. The rocket booster provides a huge amount of acceleration, surpassing even the Hydra, Besra and P-996 LAZER. It is important to note that the rocket functionality is limited and must be recharged. However, unlike regular JATO boosters found on other planes, it can recharge in mid air after some time, although it will recharge quicker while on ground. Its recharge time while in mid-air is relative to the plane's speed, meaning if the player somehow loses speed considerably, the booster will recharge quicker to counter this issue.

The stock rocket booster can propel the plane for 20 seconds if used continuously, while the Rocket Boost Upgrade gives an extra 5 seconds. Considering the plane relies mostly on the booster for mobility, this can make a small difference in the event of a dogfight, as the speed granted allows the aircraft to outpace homing missiles or quickly escape to a grounded player's blind spot above them. Similarly, deactivating the booster may slow down the plane considerably, allowing for tighter turns to keep aiming the target aircraft easily, while most aircraft struggle to aim at the Starling by performing wide turns.

One should note that the booster won't recharge if the engine is turned off, nor being able to be used. This can be an issue if the plane gets damaged, to the point the engine will shut off.

In terms of defensive capabilities, the plane is well equipped. Just like all of the airplanes with upgradeable armor, it can survive quite a bit of damage before being destroyed. The aircraft can survive direct hit from two explosives and will be destroyed from a third hit. It can also withstand up to five explosive rounds from the Heavy Sniper Mk II and eighteen shots from the Heavy Sniper.

? Increased fuel capacity for extended use of the rocket boost.

The tail marking on the aircraft changes when applying different liveries:

The plane's instrument panel and targeting reticule at night. 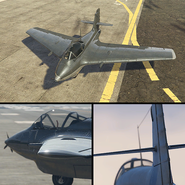 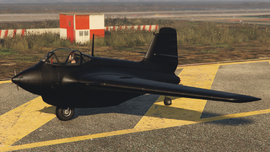