Underground Cage Fighting is a fighting minigame in The Ballad of Gay Tony.

It is introduced to the player by Santo during the mission "Momma's Boy". Luis Lopez can either compete for $100 or spectate for $50.

You can find Cage Fighter Arena around the area where Playboy X's Penthouse is located.

While spectating, bets can be placed on the winner. Each time the player defeats an opponent, the loser's body stays on the ring, and a new challenger is put in the next round. If Luis loses and is knocked out, he is taken to the Holland Hospital Center, but doesn't lose money except entrance fee.

Beating all 6 rounds rewards the player with the "Bear Fight" achievement and $4000 reward. Beginning with the 3rd round, opponents bring baseball bats and knives.

A good way to get a lot of money is to go into spectator mode and find out which fighters have really bad fighting techniques (i.e. swinging their arms around) and who has good ones. Keep going through the fights until there is match between someone who is bad and someone who is good. There's never a guarantee though. Never bet all your money in one go unless you're ready to lose it. So saying, you could easily double what you have (or more) by choosing the right fighter. Another good way to make money is to save your game and then bet all your money on one fighter. If you win you get loads of money, but if you lose all you have to do is reload your game and try again. 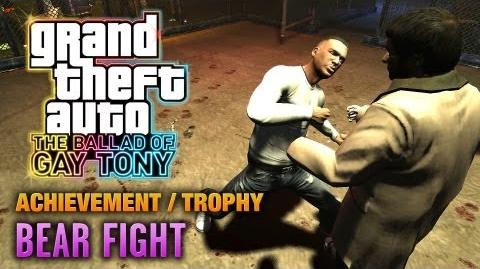 Retrieved from "https://gta.fandom.com/wiki/L.C._Cage_Fighters?oldid=1156977"
Community content is available under CC-BY-SA unless otherwise noted.