The Grand Theft Auto III rendition of the car is heavily based on a 2001-2006 Chrysler Sebring sedan and 300M (both the design and the fact that the car has a longitudinally mounted engine in the Xbox version). The trunk sitting noticeably higher than the beltline was taken from the Sebring's predecessor, the Chrysler Cirrus. The beta version's more bulbous design seems to take more from the 300M whereas the final version leans more towards the Sebring. It comes with grey bumpers and trim, giving it the appearance of a base model. Despite the Japanese inspired name, the only similarity to a Japanese car is how the front end and hubcaps bear some resemblance to a fifth generation Honda Civic. Kurumas spawn in a variety of body colors with secondary-colored bumpers (always set to white).

For Grand Theft Auto: Liberty City Stories, the Kuruma has slight cosmetic changes to make it look like a generic Japanese sedan during the late 1990s, the front appearing to resemble a 1992-1995 European Toyota Corona or a 1997-2000 Nissan Altima (styling cues from the 1995-2000 Hyundai Elantra). The bumpers and trim can be body-colored to give it a more upscale look, although there still are models with unpainted trims and bumpers, especially if the car is sprayed white or grey.

During the development of GTA III, the Kuruma was originally known as the "Sentinal", not to be confused with the Sentinel which is another sedan in the final version of the same game that was previously known as the "Beamer" during development. It's beta internal name was "Intrepid", bolstering the connection to the Chrysler Sebring, as the Intrepid was Dodge's variant of that same car. Indeed, the beta version more closely resembled the Dodge Intrepid before the changes that made it appear closer to the Sebring.

The Kuruma returns in the Heists Update for Grand Theft Auto Online, this time depicted as a sports sedan. The overall shape of the car seems to be based on the Mitsubishi Lancer Evolution X, as evidenced by the overall design and front fascia. The rear wing and hood scoop closely resemble those of the 2015-2016 Subaru WRX STI.

On the front, the central portion is predominated by a trapezium-shaped split mesh grille, featuring a chrome trim on the surrounding, a plastic wide separation acting as the bumper and a manufacturer emblem on the upper grille, as well as a plastic insert below the grille, having pointy ends aligned with the body-coloured sections beside it. Next to the lower grille there are two intakes with plastic trim, circular fog lamps on the lower outer corners and LED stripes above these, while the areas next to the upper grille have a set of dual headlamps, turn signal and light strips surrounded by chrome trimmings, denoting an aggressive aspect. The bonnet sports an intake/scoop on the middle.

The sides of the car have a slight concave design passing through the doors, with the front fenders having thin vertical exit vents with a chrome detail above. The greenhouse area features plastic trim around the windows and on the roof, black mirror shells and what look like vortex generators with additional brake lights.

On the rear, the car features a boot with a chrome detail over the license plate, a medium spoiler and the corresponding badges. The tail lamps follow a similar pattern to the headlamps, consisting of inner brake with reverse lamps on the boot, and marker with turning lamps on the edges. The bumper features red marker lights on the edges and a plastic section on the centre, with mouldings for the twin exit, twin exhaust tubes. The interior is shared with the Sultan.

The primary colour of the car is applied on the bodywork and the interior stitching, while the secondary colour seem to be applied on certain modifications. The Kuruma shares its stock rim design with the second generation Baller and the Surano. 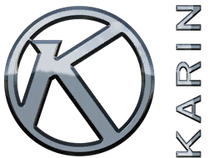 In GTA III, the Kuruma has a five-cylinder engine with a turbocharged sound, a five-speed gearbox and a FWD powertrain. Whilst the engine is powerful enough to propel the light Kuruma to high straight line speeds, the front wheel drive layout causes understeer. Players may therefore favor using the handbrake to swing around turns at high speed. In GTA Liberty City Stories, its engine is naturally-aspirated, coupled to a three-speed gearbox and emits the same engine sound as the Manana, Idaho and the Perennial.

The Kuruma's neutral handling makes it a good choice as a "beginners' car", and it is the first car the player drives in both GTA III and GTA Liberty City Stories (in the missions "Give Me Liberty" and "Home Sweet Home", respectively).

The Kuruma possesses almost identical handling properties to the GTA III rendition of the Taxi.

The Kuruma has a modeled twin-cam straight six engine, placed longitudinally in a front engine, all wheel drive layout (a rather unique distribution of 1/3 of the engine power to the front wheels and the rest to the rear wheels). According to Southern San Andreas Super Autos, the car has a 6-speed gearbox, a top speed of 147mph and weights 2,866lbs. The Kuruma features a turbo dump-valve sound effect by default, although the player can add another turbo for a significantly higher acceleration.

Due to the lightweight chassis and top-heaviness on the car, The Kuruma has a tendency to lift onto two wheels and even flip during sharp, high speed turns, or roll the car. It is slightly bested by the Sultan in terms of top speed. However, in terms of grip, the Sultan stands a heavy ground when attacking corners at high speed. The Kuruma tends to slide attempting to attack corners at similar speeds. Off-road, the Kuruma is one of the fastest cars in the game, with its high traction allowing for high speeds on off-road terrain which allows it to keep up to even some Super cars.

The Kuruma does not deform easily when crashed, as it can only be scratched or lose body parts (it still has bodywork deformation, albeit to a lesser extend). The same is true with the Panto and Coquette Classic.

The Kuruma as the "Sentinal" during development of GTA III. 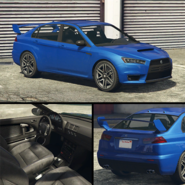 The Kuruma on the updated Rockstar Games Social Club.

The Kuruma in the cinematic preview on GTA Online Rockstar Games Social Club.

The rooftop brake lights on the Kuruma; these are absent on the armored variant. 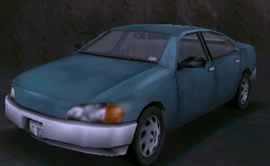 The unique Teal coloured Kuruma from Give Me Liberty in GTA III.

The Kuruma frequently appears as the vehicle of choice of the Kkangpae: