The Kurtz 31 Patrol Boat is an armed patrol boat featured in Grand Theft Auto Online as part of The Cayo Perico Heist update.

The boat is evidently based on the Vietnam War era Patrol Boat, River, sharing the distinctively bulky hull, roof and radar dome, although the latter is mounted on the rear of the cabin.

The vehicle features a large rigid hull with an elevated cabin compartment on the middle section, metal frames supporting a large roof and an open back for access, along with two metal walls on the aft section. Numerous lifebuoys can be seen around the cabin compartment, as well as a tall radar dome behind the cabin with a US flag attached to it. The boat is fitted with small lights on the sides of the cabin and on the stern that illuminate when the lights are on, along with two large front-facing spotlights beside the cabin compartment that work when switching to high-beam lights. The interior of the boat is mostly traditional and uses "Truck" analog dials, like most boats.

The vehicle is usually seen with a worn appearance and a shark teeth pinup on the bow. It is set to spawn in a dark green primary color applied on the upper half of the hull, as well as a dark red secondary color on the lower half of the hull.

The boat is armed with twin machine guns mounted on a front rotating tub and a single shielded machine gun turret on the aft section, all of them resembling Browning M2HB .50 caliber machine guns. 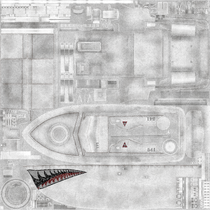 The boat has limited performance and handling due to its large body and heavy weight, being faster than most vehicles like the Marquis and the Tug, but inferior to most boats such as the Police Predator and the Suntrap. While the vehicle has moderate protection against bullets, it lacks armor, being vulnerable to explosives in general.

The vehicle is powered by two inboard engines, also using what seems to be Pump-jet drives.

The Patrol Boat is equipped with two turrets that are operated by two independent gunners and require manual access, as there is no option to switch seats. 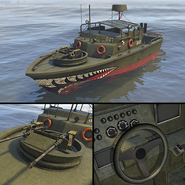