"The end of time"

Kronos is more prominent in Grand Theft Auto: Vice City Stories, with a store in Downtown Vice City and its logo appearing on vans around the city. Kronos clocks and watches can also be found within the game. Some adverts in Downtown and Escobar International Airport advertise the Kronos "Twatch" (a portmanteau of "twat", a derogatory British term, and "watch"), which appears to be a digital calculator watch, which were popular in the 1980s.

The company has one known watch that is advertised in Grand Theft Auto IV and Grand Theft Auto V: "The Gigante". In addition, a fully functional Kronos wall clock can be found in the South Bohan Safehouse, as well as various other interiors such as Oleg Minkov's apartment. Kronos has its own store on Elgin Avenue near Legion Square, in Los Santos.

It is suggested that by 2013, Kronos has a rivalry with the more luxurious brand Crowex, as the inscriptions for Crowex watches that can be bought in Grand Theft Auto Online claim that they are willing to pay more for product placement than Kronos. 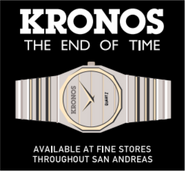 Advertisement for the "Twatch" in GTA Vice City Stories.
Add a photo to this gallery 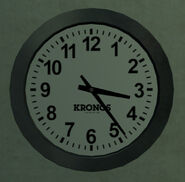 A Kronos clock at the South Bohan Safehouse, GTA IV.

Advertisement for "The Gigante" in GTA IV and V.

"The Gigante" in GTA IV and V.

An ETR1 with Kronos livery.

A Locust with Kronos livery.
Add a photo to this gallery

Retrieved from "https://gta.fandom.com/wiki/Kronos?oldid=1260321"
Community content is available under CC-BY-SA unless otherwise noted.