Standard White - 100%
“It sounds so simple in theory. Why shouldn't the cutting edge of hypercar design dovetail seamlessly with the bleeding edge of competition-ready, open-wheel racing tech? Well, forget the theory. Sit in the driver's seat. Take a breath, pucker up, and shoot a tentative glance in the direction of the throttle. Did you feel that? Have you noticed that you are suddenly a mile and a half into the next time zone, and your face is inside out? Yeah. That's why.”
— Legendary Motorsport description.

The Benefactor Krieger is a two-door concept hypercar featured in Grand Theft Auto Online as part of the continuation of The Diamond Casino & Resort update, released on September 12, 2019, during the Krieger Week event.

The Krieger is based on the Mercedes-AMG One, a hybrid sports car yet to be put into its limited production. The headlights are inspired by the ones found on the second generation Honda NSX, while the vent on the bonnet seems to be taken from the Rimac Nevera. The rear bears a resemblance to the Audi R8 LMS GT3. The exhaust seems to be inspired by the one found on the Porsche 918.

The Krieger is distinguished by its sleek, aerodynamic profile and predominated by CFRP details around it, where the front features a carbon-fibre splitter on the lower side, while the grille intake area features carbon-fibre details and separations around and the corresponding Benefactor emblem on the centre. On the upper area, the car has a set of five LED main lamps, two inner LED turn signals and lower high-beam light strips on either side, while the bonnet area features an impressed area for the central intake, with a sectioned duct in front.

The sides of the car are denoted by the exit ducts on the front quarters and the inset formations on the carbon-fibre skirts, intended to direct airflow to the rear brakes. The doors have two long mirror supports slightly below the door windows and square-shaped holders on the ends, all of them finished in carbon fibre. The greenhouse area has plastic finishing on the window trims and the separations between the door windows and the rear-quarter windows. The roof is mostly occupied by a long intake leading to the engine bay. The area behind the cabin is predominated by a carbon-fibre panel, with two gray sections holding circular exhaust tip. A set of carbon-fibre fins can be also seen over the rear fenders.

The rear end features a central panel bearing the Benefactor emblem, while the outer sides have a set of red light strips and small square-shaped lamps. The middle section is predominated by a set of meshed exit vent, with the central one partially covered by the license plate and the outer ones surrounded by plastic details, also having red vertical light strips. The lower area is mostly occupied by the carbon-fibre diffuser. The entire underside is carbon plated, with elevated portions on the front and the axle sections.

The interior of the car is shared with the FMJ, though it uses a set of carbon-fibre paddle shifters, in a similar manner to the Tempesta and the Toros. A Benefactor emblem can be seen on the horn cap.

The Krieger can be considered as a great all-around supercar. Not only does it have good top speed and handling, but it also has excellent acceleration and traction, allowing to move quickly after slowing down. The all wheel drive layout also gives good capabilities on roads and off-road environments, but obstacles may be a problem for its stability. Its steering capabilities are generally favorable to take curves and sharp turns, although braking is still recommended for the latter, as it may suffer slight understeer at high speeds. Because of the acceleration and drivetrain, the Krieger is capable of climbing steep hills with ease, having little to no traction loss.

The Krieger has one (the eleventh) Advanced Flag enabled.[1] The purpose of this flag is unknown, but it appears to have little impact on performance.

The Krieger has a mid-rear engine coupled to a 7-speed gearbox in an AWD layout (20% front, 80% rear). Although the exhausts suggest a V-shaped engine, its exact configuration is unknown, as it has no in-game model. Its engine sound is similar to supercars like the Zentorno, together with a high pitched sound, possibly a variation of the X80 Proto engine sound. 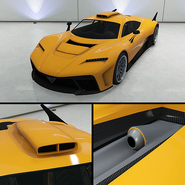 The Krieger on Legendary Motorsport.

The Krieger on the updated Rockstar Games Social Club.

The Krieger in the cinematic preview on Rockstar Games Social Club. 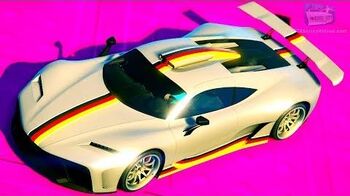