Standard White - 100%
“So, it begins! The funds are transferred, the paperwork is complete, and you are the kapitan now!
I am Helsman Pavel, reporting for duty! Did someone mention sub comes with top level operative for covert actions?
Well, that's me. Come aboard and I will give you the tour, and we will talk about what Mini Madrazo has in store for us.
This will be fun.


”
— Pavel to the player upon purchase of a Kosatka

It is maintained, operated and manned by Pavel.

“The jewel of late Soviet era naval engineering with state-of-the-art systems and upgrades.”
— Pavel on the Kosatka

The submarine takes design cues from the Russian Kelmar and Delfin Delta-class submarines and the Chinese Type 094 submarines.

The vessel is a large cylindrical Teardrop hulled submarine with a length exceeding that of the Galaxy Super Yacht[3]. The bow is spherical with a player-selected flag marked in the center, just below the surfaced waterline. A vertical sail (incorrectly referred to in game as a Conning tower[4]) with horizontal diving planes is located a quarter of the length back from the bow of the vessel. This is marked at the front with a Russian heraldic shield featuring a two-headed-eagle, 1896, the Russian naval ensign, a five-pointed star and the Ф Cryllic character. The player's flag is repeated on the side of the sail along with a prominent 81 numeric stencil. A light and mast are atop the sail, with the former able to be toggled on or off when submerged.

Immediately aft of the sail, a raised rectangular "hump" extends for approximately one third of the length of the sub. This houses the interior Moon Pool and Guided missile systems. Eight permanently open missile tubes are present in two rows of four. Plating sections on the hull forward of the missile tubes are indicative of the Moon Pool helicopter entrance hatch. Similar underside plating indicates the entry point for the submersible Moon Pool bays. The hump section tapers down to the tail where stabilizing fins and the twin seven-fin propellers can be seen. Inlet valves for the ballast system can be seen under the aft section of the boat.

An access door is at the front of the sail and there are access hatches just forward of the sail and aft of the hump. When submerging and surfacing, a unique dive alarm is heard.

The Kosatka's interior layout is very similar to the Ramius, a submarine featured in The Doomsday Heist.

Several stairs provide connection between the levels, as well as ladders that allow players to exit the Kosatka through the forward or aft hatches or via the sail at the bridge. 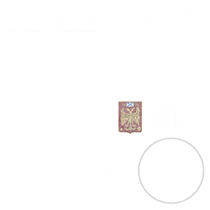 As an enormous submarine, the Kosatka handles relatively poorly due to its sheer size. The Kosatka is difficult to operate or perform evasive maneuvers. However, it has surprisingly good turning capabilities and while it has much slower acceleration, it has a high top speed that allows it to rival the Dinghy, due to its enormous engine and propellers.

The large frame and length of the Kosatka limits most of its presence to open water and will struggle to move in shallow waters and rivers, risking beaching if the submarine attempts to negotiate overly shallow or convoluted shorelines. It is also very hard to dock, requiring the player to step in water unless it is parked, for example, at the Del Perro Pier.

The Kosatka submerges and surfaces in a manner that befits a vessel of its size, and it is unable to descend nor rise at an angle as sharp as the other submersibles in the game, instead rising and descending almost horizontally.

While piloting the boat, there are only two camera views available, a long follow camera, and a First Person/Hood cam view which is positioned immediately on top of the crest on the sail overlooking the bow.

While driving, the player may engage an autopilot function (similar to that used on the Avenger) and leave the helm with the boat remaining in place. This also allows the vessel to remain underwater and avoid most threats, although this limits access for the Sparrow.

The submarine has the same dive depth limit of approximately 500 ft as the other submersible vessels.

has been destroyed
You died

When the vessel is destroyed, the player will respawn on land and can request it from Pavel via the Interaction Menu without a cooldown.

The Kosatka is one of the weakest command centers in the game, only able to withstand 12 homing rockets before destruction. Paired with its sluggish mobility and enormous frame, the Kosatka is extremely vulnerable to damage and can be destroyed by enemy aircraft and even other submarines in direct engagements. It is virtually immune to small arms fire and regular bullets.

However, the Kosatka is capable of staying off radar if submerged underwater, allowing it to stay hidden from enemies unless they are in close proximity to the submarine, or own a Sonar System upgrade for their own Kosatka.

It should be noted that due to its nature as a naval vessel, it can be difficult to even reach the Kosatka, allowing the submarine to keep its distance from the mainland and firmly out of range of threats such as the Homing Launcher and RPG. Only vehicles like the Stromberg and the Toreador can reach the submarine and outmaneuver it, so players have to be aware of such threats.

“What better headquarters for plotting the elaborate offshore raid on a private tropical island than a decommissioned nuclear submarine?”
— Rockstar Newswire [1]

In addition to the heist planning computer for undertaking The Cayo Perico Heist, the Kosatka has additional functionality.

During the Heist preparations, collected equipment will appear throughout the boat:

The Kosatka is added to the Interaction Menu under the services section with the other vehicle properties like the Galaxy Super Yacht, Mobile Operations Center, Avenger and Terrorbyte.

While seated at the Helm, the owner can choose to Fast Travel to set locations, similar to the Yacht. This will cost $10,000 per trip or $2,000 after completion of The Cayo Perico Heist as leader. Locations available:

Owning a Kosatka incurs a daily fee of $150 for Staff and Utility charges.

The minimum base cost is $2,200,000 and for every non-default aspect, the price is increased.

The player can modify the vehicle options at any time by re-visiting Warstock Cache & Carry and re-specifying the customization options, but will not receive any credit for previously paid for options.

The Kosatka in the cinematic preview on GTA Online Rockstar Games Social Club.

Artwork of the Kosatka.

First sign of the submarine in the first trailer.

Interior seen in the second trailer.

Missile launch in the second trailer.

The Avisa in the moon pool.

The Sparrow taking off from the Kosatka.

The bridge, with The Cayo Perico Heist planning screen, featuring Pavel and the Protagonists.

Interior map of all 3 decks.

View through the periscope.

Radio in the Mess.

Avisa docking into the Moon Pool.

Imperial crest on the "conning tower". 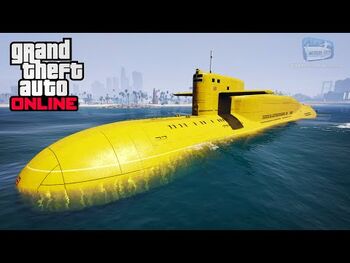 In order to purchase the Kosatka, meet Miguel Madrazo at The Music Locker and discuss his job opportunity.
Visit warstock-cache-and-carry.com to purchase a Kosatka submarine. This gives you access to The Cayo Perico Heist as a VIP, CEO or MC President.
“Ahoy, captain! I was given your number by Mini Madrazo. He said you were in need of my services. And my Kosatka. Come my friend! It is listed on Warstock Cache and Carry. The captain's chair is waiting!”
— Pavel's text.