Standard White - 100%
“It's a German-style sedan with none of the reliability. An Italian car with none of the flair. Luxurious and mundane. Exciting and banal. Sporty and lame. Never make another decision again. The Lampadati Komoda is a high-performance luxury vehicle for the executive who wants to have it all and nothing at the same time.”
— Legendary Motorsport description.

The Lampadati Komoda is a compact executive car featured in Grand Theft Auto Online as part of the The Diamond Casino Heist update.

The Komoda is directly modeled after the Alfa Romeo Giulia Quadrifoglio, with minor influences from later BMW models, such as the 3 Series and 5 Series. The grille area takes reference from the 2018 Toyota Crown (S220). The tail lights are similar to the ones found on the third generation Kia Optima.

The Komoda assumes a rather conventional design with various sporty elements around, where the front end features carbon-fibre inserts at the bottom, with the lower one spanning most of the car's width and a smaller one sitting above, on the centre. The middle section is predominated by a trapezium-shaped mesh grille with a black surrounding and two wide meshed intakes intended to direct airflow to the front brakes, along with a smaller intake located between the small insert and the main grille. The upper corners of the main grille have black details that extend and surround the silver/chrome headlamp housings, which these housings consist of dual circular main units on the front and triangle-shaped turn signals on the front quarters. The bonnet is relatively simple and opens to reveal the engine bay partially covered by a black panel, while the Lampadati emblem can be seen just in front of it, above the grille.

On the sides, the front fenders of the car have large exit vents with black surroundings on them, while the doors have horizontal handles that are painted with the rest of the car. On the greenhouse area, the car has black window trim and inner pillars, along with mirror shells whose upper halves are painted and the lower halves and frames finished in black. The roof has a single vortex generator.

The rear of the car makes use of a lip spoiler on the boot and large tail lamp units with black details around, along with the corresponding license plate and badging displaying the manufacturer. The lower area of the bumper is predominated by a black section covering the rear and part of the underside, housing a central exit vent, three diffuser blades and two large circular exhaust tubes.

The car's bodywork is painted with the primary colour, while the secondary colour seems to be only applied on the secondary-coloured options available in mod shops. Although not accessible, a trim colour is also available for the interior dashboard, horn cap, part of the doors and seats, which is always set to black. Its wheel rims are identical to those from the Adder; however, unlike the Adder, these rims are painted with the corresponding wheel colour and are not chromed (though it is only present on the ones generated in Content Creator, the ones seen in the The Diamond Casino Heist preparation and finale, and the one rewarded from the Lucky Wheel).

The Komoda is a fairly well rounded vehicle, possessing good speed and great acceleration. Braking is also good, allowing the vehicle to make turns quite well. The overall handling is also adequate, though the vehicle will occasionally slide from time to time depending on how hard it is turned and accelerated, this is not severe however, as it can be easy to adjust and correct.

The car is powered by a V8 engine as suggested by the cover, coupled to a 6-speed gearbox in a front engine, rear wheel drive layout. Its engine sound is a higher-pitched variation of the one from the XA-21, and the exhaust may also crackle after letting off the gas at high revs. 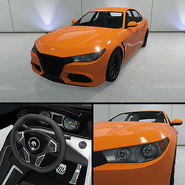 The Komoda on Legendary Motorsport.

The Komoda in the cinematic preview on Rockstar Games Social Club. 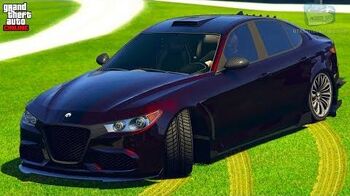 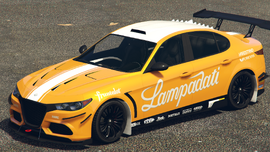 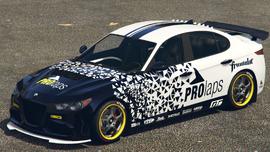