Knife After Dark is a horror film heard being advertised on a radio station in Grand Theft Auto: Vice City, parodying slasher films of the early 1980s.

The movie tells the story of Danny, a young teenager who goes on a killing spree, and is rated "R for Retarded". A line in the trailer, "I didn't know it was hockey season", appears to pay reference to the Friday the 13th films, where the main antagonist wears a hockey mask. On Pressing Issues, Jan Brown mentions that she won't let her children watch the movie. The film is advertised on the radio and has its own tagline and rating.

Male Narrator: He was just the boy next door…

Danny: Hey, can I borrow a knife?

Male Narrator: A deadly curse, a deranged killer, a small town in tears! Knife After Dark, rated R for Retarded.

In GTA Online, players who signed in on 30 October 2015 received a Knife After Dark T-shirt[1]. 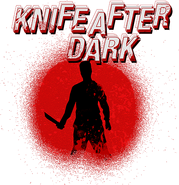 Logo of the movie.
Add a photo to this gallery

Retrieved from "https://gta.fandom.com/wiki/Knife_After_Dark?oldid=1208778"
Community content is available under CC-BY-SA unless otherwise noted.