Wikipedia has an article on:
Knife
Wikipedia

The Grand Theft Auto IV rendition of the Knife resembles the UC-RB1 knife, complete with the characteristic serrated edges on top.

The Knife looks nearly identical to the Knife in the previous game, except for slightly different serrated edges.

The Knife deals moderate damage, and always inflicts a blood effect on impact, but it is barely effective compared to other melee weapons, but surpassing the Screwdriver. In Grand Theft Auto: San Andreas, the Knife allows stealth kills that do not attract unwanted attention.

Although silent kills like in GTA San Andreas are not in the game, 5-6 strikes with the knife will kill an opponent, and it will not warrant the player a wanted level. This can easily kill an enemy on single player or multiplayer, because 4-6 quick slashes while locked on with this will either kill or critically injure anyone, considering the Body Armor does not protect against knife attacks. The Knife can also be used for a one-hit kill counter-attack, by dodging an attack with the knife equipped, and pressing the attack button.

Compared to the Baseball Bat, it can be weak against an enemy, but faster when attacking them.

Just like in GTA San Andreas, players can perform stealth kills on people. However, instead of slitting their throat, they simply stab them in the neck. The knife is useful for close encounters, but lacks brute force in comparison to the Crowbar or the Nightstick. It is the one of three weapons that can be used underwater, the others being the Antique Cavalry Dagger and the Brass Knuckles, and thus can be used to fend off sharks, showing its versatility on the environment. 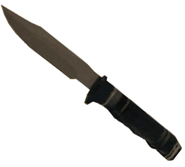 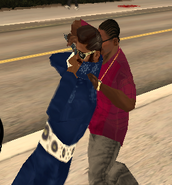 A hammerhead shark and the Knife underwater in GTA V.
Add a photo to this gallery

Retrieved from "https://gta.fandom.com/wiki/Knife?oldid=992528"
Community content is available under CC-BY-SA unless otherwise noted.