Kisama Beer (Japanese: 貴様麦酒, lit. "You Beer") is a brand of Japanese beer in the HD Universe which appears in Grand Theft Auto Online, Arena War.

Kisama Beer is a beer brand seen on the Nightmare vehicles in the Arena War update. The logo can be seen on several of the Nigthmare vehicles like the Nightmare Dominator or Nightmare Cerberus. The Japanese Kanji symbols on the armour plating "貴様" just says "Kisama", a term literally meaning "you", but in modern day Japanese is used to address someone in a rude manner.

The brand returns in The Diamond Casino Heist content update as a sponsor on racing liveries.

Kisama appears to be a parody of Kirin, a real-life Japanese beer brand known for its sports sponsorship. 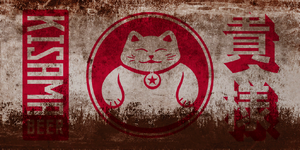 A Kisama armour plate seen on customization for the Nightmare Dominator.
Add a photo to this gallery

Retrieved from "https://gta.fandom.com/wiki/Kisama_Beer?oldid=1198685"
Community content is available under CC-BY-SA unless otherwise noted.