Marshall Nash
“We've got some hot news comin' in! This weekend we've got three escaped convicts, all in good shape, for sport huntin'!”
— King 130.7

King 130.7 (also known as Rebel Radio) is a radio station in Grand Theft Auto 2. It is hosted by Marshall Nash and plays punk, hard rock and pop.

The station has an over-all rough redneck attitude. The music of choice is punk, hard rock and, strangely, pop. It is only available in the Residential District of Anywhere City. The frequency is 130.7 FM.

The DJ is Marshall Nash, who has a thick Southern accent. He broadcasts news of escaped convicts, encouraging listeners to hunt them. He also seems to be a somewhat old-fashioned guy, as he listens to music in his 8-track player and invites to the station an owner of an old pick-up he saw driving around. 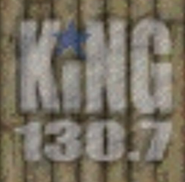