Standard White - 100%
“The Khamelion is an electric hybrid luxury sports sedan. Don't laugh. It isn't a complete oxymoron. This beauty handles so well, you'd never know you're driving a plug in. Welcome to the future (so long as you have access to a specialized charging station).”
— Legendary Motorsport description.

The Hijak Khamelion is a hybrid-electric sports car exclusive to Grand Theft Auto Online. It is available exclusively to players who bought the Collector's Edition in the original version and it is available for any player in the enhanced version.

The Khamelion is a grand tourer-style car whose design is unique. The car is mainly based on the Fisker Karma in the overall shape such as the sides. It features elements from the 2011 Jaguar C-X16 Concept such as the front quarter panel and lower side body styling. The greenhouse and rear quarter panel seem to have been inspired by the Alfa Romeo 8C Competizione. It is also inspired by the 2012 Jaguar XKR special edition for the bonnet/hood and front face layout, but the shapes appear to have been combined with those found on the 2011 Ford Evos Concept and Exagon Furtive-eGT, also the lower edge of the front bumper is nearly identical in terms of shape and identical in terms of material. The rear end of the car is clearly inspired by the Maserati GranTurismo's. Other parts of this car seem to be inspired by the Aston Martin Vanquish.

At the front, one can instantly notice a combination of lines and curves used to create an interesting looking front end. At the very base of the front bumper, a CFRP lip is present, following the bottom edge of the bumper. The lower edge of the bumper increases in height in the central two-thirds of its width. The bulges in the outer bumper area are curved such that they are linked to the bulge running along the sides of the main body area. The main grille, is an irregular hexagon, which is a little wider than the elevated bumper area. The grille features a horizontal chrome strip at mid-height across the mesh. The headlamp units are interesting, in that they have four straight edges and then a curved top edge. The two lower edges are parallel with edges of the main grille, and the unit features two circular lamps and then a turn indicator lamp in a separated area at the top. Like the XKR, the bonnet, hood features elevated areas running from the inside edge of the headlights and then another elevated area in the central section of the bonnet/ hood's width.

The sides of the car feature a lot of curvature, just behind the front wheel arch a chrome-trimmed vent is visible. The main bulges than run along the side of the car span almost the entire wheelbase. The greenhouse section of the body is one area where curvature is very prevalent, even the mirrors have aerodynamic shells. The windows also have an unknown tint applied as default.[1] The B-pillar line is linked to the line signifying the edge of the rear quarter area. The rear quarter area curves away from the body. The wheels featured on the car are deep dish and made of five thin irregular pentagons, which form an air-filled five-point star between them and the central point of the wheel.

The car's tail light units share a similar shape to the Maserati GranTurismo, they are split into two main sections, one above the other. A thin horizontal chrome strip connects the units and any area of the units above this strip are clear coloured. Adjacent a below the license plate area, the rear bumper protrudes more. The lower edge of the bumper and top edge of the base formation are outlined by a ledge. At the base of the rear bumper a diffuser unit spans most of the car's width. Either side of the diffuser, the car features parallelogram-shaped exhaust tips; two either side, one above the other. Some Khamelions may sport a small, curved spoiler that runs between the two "creases" of its boot lid, although this spoiler does not affect the handling at all and is therefore merely cosmetic.

Despite a badge claiming a Solar Hybrid V12, the vehicle is actually powered by a front-mounted engine, though in the enhanced version, the electric engine is replaced with a somewhat underpowered turbocharged 2 liter hybrid V12 engine putting out 450hp, all according to the website. Either way, the engine model in-game shows a twin-cam inline 4 engine. As such, the engine loses no power upon up/down shifting; creating smoother turns and quicker braking. Stopping power is provided by large, cross-drilled disc brake rotors, which are matched to white, six piston brake calipers at the front. The Khamelion is fairly weak for a sports car, only taking 3-4 head on collisions to severely damage the vehicle. Another interesting feature to the Khamelion is that when damaged to the point of disability, the engine will simply cease to work, making no sound or movements due to the electric circuits.

Handling-wise, the Khamelion is not the best performer in its class. It understeers in fast corners due to its long wheelbase and a heavy front-end, owing to the car's dual-engine configuration (having both internal combustion engine and electric motor). However, the car sits low, giving it excellent traction which combines well with the car's smooth power delivery, that also makes it hard to lose its back end. The great traction and smooth power delivery allows the car to pull off with very little wheelspin. The car's ride is hard though, due to the car riding on low-profile tyres and the weight of the batteries. The car crashes upon small road imperfections and gradient changes as a result. The Khamelion's handling is hampered on wet roads, often resulting in spinouts along with wheelspins that affects its handling altogether. Even with upgrades, the Khamelion is not a suitable vehicle for races due to its underpowered engine that makes it difficult to catch up with other fast vehicles in the Sports category.

A low angle front and side view of an early form of the Khamelion.

A rear view of the car. 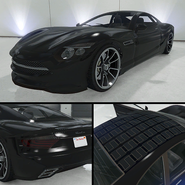 A Khamelion on Legendary Motorsport in the enhanced version of GTA V.

The Khamelion on the updated Rockstar Games Social Club.

The Khamelion in the cinematic preview on GTA Online Rockstar Games Social Club.