Unknown (TBoGT)
Lauren McFall (GTA V/GTA Online)
“Are you on Snapmatic? My snaps are legit. Like, I'm a brand ambassador for so many brands now.”
— Kerry McIntosh

She is a 28 year old supermodel from San Fierro with a history of drug and alcohol abuse. She is a parody of both supermodel Kate Moss and singer Britney Spears (particularly her 2007 meltdown). She also resembles Britney Spears in her GTA V appearance.

Not much is known about Kerry's story before the events of The Ballad of Gay Tony. According to her LCPD Database page, she has been arrested twice, once in 2006 for a DWI (Driving While Intoxicated) and also in 2007 for possession of cocaine. Also in 2007, she was photographed with a male stripper blowing cocaine up her ass at a Love Fist reunion after-party, which marked the beginning of her breakdown and subsequently boosted her career according to Weazelnews.com. She had a reality show sponsored by Salivex, who pulled down its ads in 2008 due to the lack of breakdowns on camera. After her agent told her the news, she ran naked through the freeway while pulling out her hair.

In The Ballad of Gay Tony, during one Club Management session, Luis has to drive to Bohan to the Iron Belly Deli to pick up a take-out order and return the food to the Hercules gay bar for Ms. McIntosh. During this errand, Ms. McIntosh's personal assistant Danni calls Luis multiple times en route to the club, checking on the order. If the player takes too long to deliver, Ms. McIntosh finds a pizzeria in Alderney, much to the frustration of Luis, who went through all that trouble for nothing.

Presumably the night before the mission Tunnel of Death, she went to a four-day, luxury rehab clinic in Los Santos before checking out on day three, again going under the influence of drugs and alcohol and crashing her red Huntley Sport into a Wigwam Burger restaurant that night. She was supposedly going to stay at another luxury rehab facility in outer space when she decided to stay on earth and sue her previous clinic for being ineffective, later going to a Bahamas luxury clinic. Not long after, she chased a bathroom-peeping paparazzi away from her townhouse wielding a kitchen knife.

During the events of Grand Theft Auto V, she is encountered by Trevor Philips near the Vangelico Jewel Store on Little Portola in Rockford Hills, Los Santos with her dog Dexie. Trevor is ordered by Nigel and Mrs. Thornhill to collect Dexie's collar as a souvenir, which results in the dog fleeing at the sight of Trevor when approached, much to the dismay of Kerry. After following Dexie to a stop, he approaches the animal and takes its jewel-encrusted collar. Kerry also has a Bleeter profile and her bleets can be read from time to time.

“It's weird nobody from FIZZ! is following us. I texted them. You'd think at least three or four paps would be hounding us.”
— Kerry to the online player on the way to their nightclub.

Kerry returns in GTA Online as part of the After Hours update where she is one of the celebrities the GTA Online Protagonist can be called upon to deliver to their club to maintain their popularity. She will then be found inside the nightclub for a period of time, dancing in the VIP lounge area.

As part of the The Diamond Casino & Resort update, the player can buy a painting depicting Kerry to decorate their Master Penthouse.

As part of The Contract update, Kerry will hire F. Clinton and Partner to destroy a lockup owned by a paparazzo who has "finally got their hands on a real money shot". 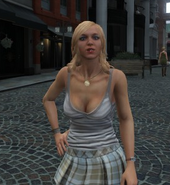 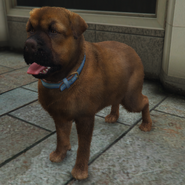 Drinking in the VIP lounge of a player's nightclub in Grand Theft Auto Online.