Yo-Yo
“Ohh, what - a no good, narrow minded, hypocrite gang banger telling me what is right and what is wrong?”
— Kendl Johnson to Sean Johnson in Cesar Vialpando.

Kendl Johnson is a character in the Grand Theft Auto series who appears as a central character in Grand Theft Auto: San Andreas. Kendl is the younger sister of Grove Street Families member (and the game's protagonist) Carl Johnson and girlfriend of Varrios Los Aztecas gang member Cesar Vialpando.

Kendl is CJ and Sweet's younger sister, and the older sister of the late Brian Johnson. Their mother is Beverly Johnson (who dies just before the game begins). She is also Cesar Vialpando's girlfriend, and therefore affiliated with both Cesar's Varrios Los Aztecas and the Grove Street Families. After learning about Big Smoke and Ryder's betrayal, CJ requests that Cesar bring Kendl to safety by fleeing from Los Santos. Later in the storyline, Cesar pondered proposing to Kendl but the question of whether Kendl accepted or not remains unanswered.

Kendl is depicted as intelligent and pragmatic which suggests that although her brothers turned to crime as a last resort to support themselves, Kendl could become successful within the bounds of the law which makes her the "brains" of CJ's business ventures. She possesses entrepreneurial talents, strong willpower, creativity, and a sense of leadership. In fact it was Kendl who came up with the idea of "Letting money work for you" and when CJ responded with, "I ain't going to no college man", she shot back that she will take care of it. She has little tolerance for whining or complaining or complacency which causes CJ and others to regard her as a bit bossy. This is exemplified in the mission Zeroing In, when she discovers everyone sitting around playing poker and chastises them questioning if that was how they would build their business.

Kendl in the original version of GTA San Andreas. 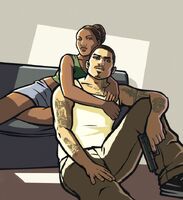 Artwork of Kendl with Cesar. 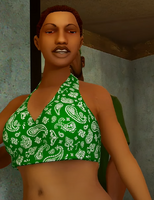 Kendl Johnson in the trailer for Grand Theft Auto: The Trilogy - The Definitive Edition.