William Fichtner
“Do I look like I could intimidate a jury? I couldn't intimidate a child - and believe me, I've tried.”
— Ken Rosenberg to Tommy Vercetti in Jury Fury.

Ken Rosenberg successfully graduated as a lawyer, although he is suspected of cheating on his exams, and established his own business, K. Rosenberg & Co., setting up the firm in Vice City, with the company's office being inside the Hotel Harrison in Washington Beach. He started working for the Forelli Crime Family at some point in 1978, aged 25. [2] By 1984 his company has begun to represent the Vice News Network legally, with the company advising people, through a VNN news report, to quote the second amendment of the American constitution if they are prosecuted for illegally using a firearm, after open gun fights in the Downtown district (seen during the mission Nice Package). By 1986 he has also established ties with the Liberty City based Forelli Family, an Italian-American mob, and has begun to represent them legally.

In 1986 he helps Sonny Forelli, the suspected Don of the Family, in establishing his family in Vice City by setting up a drug deal between the Vance Crime Family's Victor and Lance Vance and Forelli Family representatives Tommy Vercetti, Harry and Lee. The deal was ambushed but Rosenberg and Vercetti escaped, with Rosenberg hiding in his office, even missing Colonel Juan Cortez yacht party, instead sending Vercetti to meet the man who set up the deal and later to find out who ambushed the deal. Rosenberg had, before the ambushed drug deal, been representing Giorgio Forelli, who was facing charges of fraud, and sent Vercetti to intimidate two jurors. He had also begun representing real estate mogul Avery Carrington, who Vercetti later began to work for after causing a riot at the Spand Express depot.

Vercetti eventually stops working for Rosenberg, who begins to represent him and bailing him from the Vice City Police Department police stations across the city, with Rosenberg later attempting to give Vercetti advice about earning more money and about a planned bank heist. He later sides with Vercetti when Sonny Forelli arrives in Vice City and, along with Lance Vance, a former ally of Vercetti, attempt to take over Vercetti's business empire. The two become close friends, although Rosenberg's cocaine addiction later drives a wedge between the two.

Tommy Vercetti and Ken Rosenberg continue to drift apart in the early 1990s, with Rosenberg eventually entering rehabilitation at the Fort Carson Medical Center in Fort Carson, San Andreas. His rehabilitation was successful, but his friendship with Vercetti is irreparably damaged, and he is also disbarred as a lawyer. Rosenberg, however, immediately falls into the clutches to Liberty City's three mafia families, the Forelli Family, Leone Family and the Sindacco Family, who have him run Caligula's Casino, a mafia run casino in Las Venturas, with all three families having a stake in the casino.

Rosenberg is informed by Salvatore Leone, Don of the Leone Family, that he wants his money back quickly, whilst he expectantly waits for one family to kill him and blame one of the other families. Rosenberg begins to hide in his office once again, with only Tony, a talking parrot, for company. Kent Paul and his client Maccer later find Rosenberg and introduce him to Carl Johnson, who begins to help Rosenberg out of his situation, including saving Johnny Sindacco on his way to the hospital, though Johnny later dies of a heart attack after he remembers his previous encounter with Carl.

Carl later works for both Rosenberg and Salvatore Leone to kill more Sindacco and Forelli Family mobsters, both in San Andreas and Liberty City. Eventually Carl helps Rosenberg, as well as the by now trapped Kent Paul and Maccer, to escape from Salvatore Leone, telling them to lie low. Rosenberg, who began to use cocaine, also seemingly has flashbacks, once stating "Just like old times, hey Tommy?', in reference to Tommy Vercetti.

Carl Johnson: "I've got a need for an accountant and a sound engineer and I thought of you and Paul."
Ken Rosenberg: "Fucking amazing! Paul's great with figures and I'd make a fucking amazing producer! This is (sniff) this is fucking great! It's amazing!"
Carl Johnson: "Yeah, yeah, whatever you say man, but look. See you soon."
—Carl Johnson to Ken Rosenberg in a phone call after A Home in the Hills.

Rosenberg and Kent Paul later begin to work for Madd Dogg, a rapper who is being managed by Carl Johnson. He, Kent Paul, Maccer and Madd Dogg later appear in the Johnson House in Grove Street, Ganton, Los Santos, to announce their first gold record.

In Grand Theft Auto: Vice City, during the blank screen after being busted before the player respawns outside the police station, the player can occasionally hear Ken Rosenberg talking over the phone with the police in an attempt to get Tommy Vercetti released, using a variety of conjecture, insults and even threats to get his way. There are 28 lines in total. 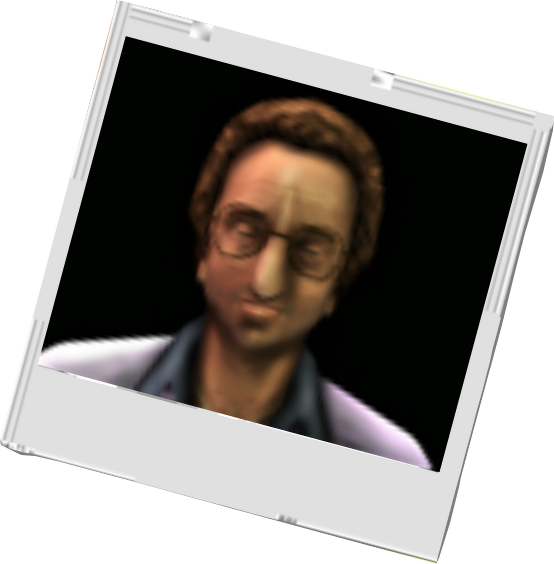 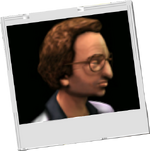 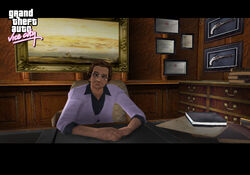 Ken in his office in GTA Vice City. 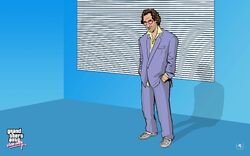 An artwork of Ken Rosenberg in GTA Vice City. 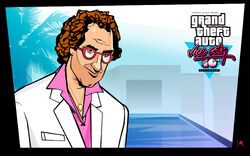