Sonny: "Tommy, what was the big plan? You think I'd just take the fake cash? Save face and run away with my tail between my legs?!"
Tommy: "No. I just wanted to piss you off before I kill you."
― Sonny Forelli and Tommy Vercetti

After failing to forcibly tax Tommy's businesses, Forelli Crime Family Don Sonny Forelli is heading to Vice City from Liberty City in order to deal with Tommy in person and reclaim his "cut". Tommy, informed of Sonny's impending visit by Ken and Lance, sets aside $3 million of counterfeit cash in an attempt to placate Sonny.

Sonny arrives at Tommy's mansion along with several Forelli Family members. As Tommy prepares to give Sonny the counterfeit cash, Lance openly betrays Tommy, citing "business" as his motivation. Sonny confronts Tommy over his attempt to placate him with counterfeit cash. Tommy, still reeling from Lance's betrayal, replies that he "just wanted to piss you off before I kill you".

This sparks a huge gunfight within the mansion. Lance flees to the mansion roof, while Tommy kills several Forelli Family members attempting to steal money from the mansion's safe. After killing several members, Tommy heads to the roof where he confronts and kills Lance.

After killing Lance, Tommy heads back to the mansion's foyer, where Sonny confirms Tommy's suspicion that the incident fifteen years earlier which resulted in Tommy being sent to prison for killing eleven men (after being sent to kill only one) was indeed an ambush orchestrated by Sonny. Now after his revenge, Tommy kills Sonny's guards before finally killing Sonny.

After the shootout, Ken reappears and asks Tommy what happened, with Tommy explaining that he had a "disagreement with a business associate". Tommy laments Lance's betrayal, before telling Ken that they won't be having anymore trouble from "up north". As Tommy announces that he is in charge, he ends the mission by telling Ken that "this could be the beginning of a beautiful business relationship".

The reward for completing this mission is $30,000 and a Hunter will spawn inside Fort Baxter or on a helipad in south Ocean Beach if the player has collected all 100 Hidden Packages. Also, members of the Vercetti Gang will carry Uzis.

Sonny Forelli about to attempt to kill Tommy Vercetti

Tommy Vercetti talking to Ken Rosenberg later on in the final cutscene.
Add a photo to this gallery 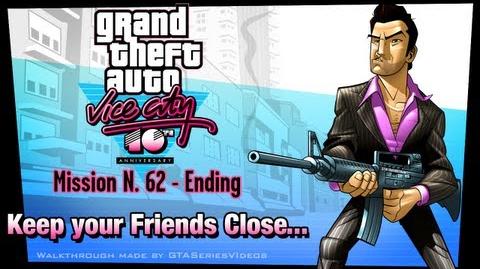 Retrieved from "https://gta.fandom.com/wiki/Keep_Your_Friends_Close...?oldid=1017918"
Community content is available under CC-BY-SA unless otherwise noted.