Keenan Shimizu
“I am going to enjoy thrusting my sword into you.”
— Kazuki Kasen to Toni Cipriani.

Kazuki is the brother of Asuka Kasen, husband of Toshiko Kasen and brother of Kenji Kasen, the father or uncle of Yuka and the Oyabun of the Yakuza.

Kazuki is voiced by Keenan Shimizu, who has also appeared in Law & Order.

Kazuki Kasen was born in Japan and moved to the United States presumably during the 1970s. According to his wife Toshiko, he, at some point, married her so he could become the leader of the Yakuza. Kazuki began to lead the Yakuza in their attempts to increase their standing in the city, in particular due to the actions of Massimo Torini and the Sicilian Mafia, and bought a casino in Torrington, Staunton Island.

Kazuki admits to his younger brother Kenji that he feels guilty for neglecting his wife Toshiko, but still thinks that what he does is right as 'a man of honor'. Toshiko secretly finds out about this, but it only pushes her hate for him even further.

Toshiko, after hearing of Toni Cipriani destroying a Yakuza tank, hires him to destroy and humiliate Kazuki, first by having Toni steal a Yakuza munitions delivery and then destroy Kazuki's casino takings whilst being transferred. Toni later accompanies Toshiko to the opera.

Toni later attacks Kazuki's casino, killing many of his men, and facing him in a sword duel, resulting Kazuki's death. After learning of her husband's death, Toshiko, feeling remorse, commits suicide. After his death, his siblings become the new co-leaders of the Yakuza. 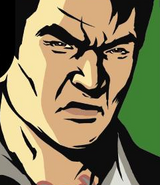 Kazuki getting beheaded by Toni Cipriani