Katie Zhan is a minor character in Grand Theft Auto: San Andreas. She is one of Carl Johnson's optional girlfriends.

She is a nurse in an ER unit in an unnamed hospital. She has had the job for three years, as she says to Carl during dates. She likes to spend her spare time at the karate dojo in Garcia, San Fierro, San Andreas. It is possible to date Katie before the San Fierro area is unlocked; in fact, this can be done even before the first mission. However, it is recommended to go to San Fierro during midday hours as she's more likely to spawn then.

During random conversations while on a date, she mentions that she's a fan of the rapper Madd Dogg, dislikes OG Loc ("OG Joke is more like it") and is disturbed by the Epsilon Program "nutjobs". She's also fascinated by death and injuries since she loves car accidents and reckless driving, and even asks Carl if he likes to lose a limb indicating she is an acrotomophile and/or an apotemnophile. Some of her dialogue implies that her fascination with death even borders on the sexual (She mentions that working in the ER gives her a "thrill"), possibly explaining her arousal when CJ collides with other cars and implying that she is an autassassinophiliac. However, she states that necrophilia is too far even for her.

Katie has a preference for diners, with the nearest diner being the Paradiso Diner Restaurant next to the Gant Bridge information centre, which is conveniently close to her home. She does not enjoy going to the restaurant located in Downtown.

Katie seems to prefer areas close to the shoreline, so options include driving around the area below the Gant Bridge and Jizzy's Pleasure Domes (including the latter's parking lot), or the Bayside area across the bridge. She also loves being driven around in Chinatown. She prefers a moderate driving speed; although she will at times encourage Carl to drive faster, doing so makes her Fun meter drop, and on-screen text will inform the player that they are driving too fast. 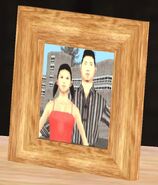 The photo that appears in certain safehouses, and home invasion interiors.