Mary Catherine Donnelly
“I gave up on my brothers a long time ago. The most I ever expected from them was to put flowers on their coffins.”
— Kate McReary to Niko Bellic in Undertaker.

Kate McReary (Irish: Cáit Mac Ruairí) is a character who appears as a main character and a girlfriend in Grand Theft Auto IV.

She is the sister of Patrick, Francis, Gerald and Derrick McReary, the only daughter and the youngest child of Maureen and an unnamed father. She works at the community center in Dukes. At first, Packie tells Niko to stay away from her, but later encourages Niko to go out with Kate. She holds conservative values towards premarital sex, and according to Patrick, "she won't put out". The player is still given the option to try and join Kate inside, but she will never accept.

According to Patrick, Kate witnessed several bloody fights between her brothers; seeing Gerry beating Francis was a traumatic childhood experience for her (she was in therapy for quite a while). Over time she has apparently become accustomed to living close to violent crime, liking Niko despite disapproval of his dangerous lifestyle. In extreme contrast to all his sons, Mr. McReary had an excellent relationship with Kate and was pretty much never angry at her. She plays a pivotal role at the end of GTA IV's story.

Kate is a bit more complicated to date than the other girlfriends. She prefers Niko to wear clothing from Modo. Her activities are also limited as well, seeing as how she does not like to go bowling, or see a show at both Perestroika and Split Sides. As stated before, no matter how many times the player tries the "try your luck" option at the end of a date, the player will never be invited inside because she only considers Niko to be a friend. Kate does not like fast food as she will respond with negative comments such as ''Fast food? Great, a heart attack!''

Unlike some other girlfriends, Kate does not have a special ability which can be unlocked. She sleeps from midnight until 8AM.

Kate has three kinds of outfits:

In Harboring a Grudge, Waste Not Want Knots, and I Need Your Clothes, Your Boots, and Your Motorcycle, she wears a white sweater and a black shirt with denim jeans.

In Mr. and Mrs. Bellic, she wears a green sweatshirt and a multi-coloured shirt with black trousers.

In Undertaker and dating, she wears a black sweatshirt with a black shirt (or somewhat dark green) and black trousers.

Kate's ultimate fate depends on Niko's decision to either do the deal or exact revenge.

If "Deal" is chosen, Kate is mad at Niko for making a deal with Dimitri when she told him not to, and doesn't attend the wedding as a result. After Niko kills Dimitri to avenge Roman (who was accidentally killed by Dimitri's hitman), Kate calls him, telling him that she heard of his cousin's death, and will be there for him. After few-in-game days Kate will call Niko and tell him that she is going away, she will say that she doesn't want to bring children in the world to be raised without a father and after a few in game hours she will send Niko an email.

If "Revenge" is chosen, Kate is happy that Niko decided to kill Dimitri rather than do the deal, she attends Roman's and Mallorie's wedding with Niko, during the wedding Kate is accidentally killed by Jimmy Pegorino (who was aiming for Niko) and Niko takes revenge on Pegorino for Kate's death. Later, after Niko has killed Pegorino, Roman says that he and Mallorie are expecting a baby and if it's a girl she will be named after Kate. 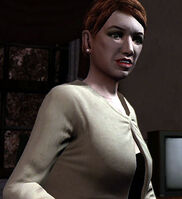 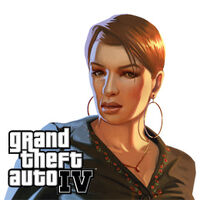 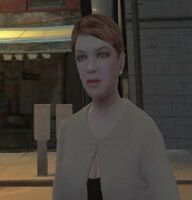 Kate on the street.