Wikipedia has an article on:
Katana

The Katana is a weapon featured in all 3D Universe games except Grand Theft Auto III.

The Katana is a Japanese sword which appears as a melee weapon. In all its appearances, it is described much like a real Katana: A long sword with a slightly curved blade and a long grip for both hands. The weapon is wielded and used in a similar manner to most bladed weapons.

The Katana is one of the most powerful melee type weapons; it is able to decapitate opponents with a single slice, and is not as heavy as the cumbersome Chainsaw. When the player is short on ammunition, the Katana is particularly useful for quickly taking down hostile gang members during gang conflicts in Grand Theft Auto: San Andreas.

The Katana in Grand Theft Auto: Vice City has the third highest damage of all melee weapons, only surpassed by the aforementioned chainsaw and the Screwdriver, as well as good range over targets (only falling below the Fist).

The Katana in Grand Theft Auto: Vice City Stories has lower damage and cannot be used for decapitating, thus making it perform similarly to the Machete.

Tommy Vercetti with a Katana in a pre-release screenshot. 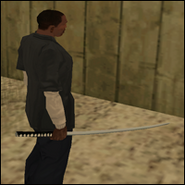 CJ with a Katana.

Mike with a Katana. 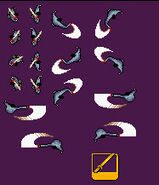 Toni with a Katana. 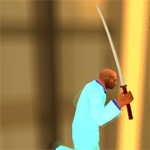 Victor Vance with a Katana. 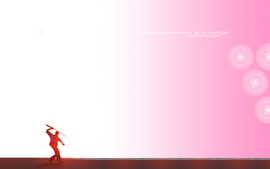 There is a glitch that will cause CJ to be able to be controlled without a head. To exploit this glitch, start a multiplayer game, making sure Player Two has a Katana. At any point during the session, use Player Two to behead Player One, terminating the multiplayer session. CJ will remain decapitated for the remainder of the single-player session, except for during cutscenes. To revert to normal, reload the game.