GTA Wiki
Register
Don't have an account?
Sign In
Advertisement
in: Missions, Missions in GTA Liberty City Stories, Side Missions

For the mission with the same name, see Karmageddon.

Karmageddon is a side mission in Grand Theft Auto: Liberty City Stories. It can be found at the Fire Station in Belleville Park, Staunton Island after completing the orignal Karmageddon mission. The mission is triggered by entering the northern, or left Firetruck (as you look at the firetrucks).

The mission takes the same premise as the Karmageddon mission, with Toni having to create havoc by targeting the residents of Liberty City in the firetruck. The havoc is recorded on a points meter, with the side mission being completed when the meter is filled. The side mission is successfully completed by filling the meter in under four minutes (precisely in 4 minutes and 1 to 5 seconds based on the last digit of the time when you start the mission) or in a faster time.

Unlike the original mission, Toni is not required to destroy the fire truck afterwards, although in order to play the mission again, a new fire truck has to be obtained at the station.

The havoc caused is a points-meter, with points given for:

The monetary reward for completing the side mission is $20 times time remaining in seconds or $1500, whichever is greater. If the player finishes it immediately with cheats, they will get at most $4900 if 245 seconds are left. Some Molotov Cocktails are also unlocked and can be found in the alleyway behind the Belleville Park Fire Station. 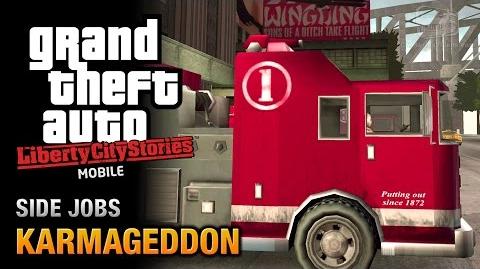