View source
watch 02:56
Raise a Floppa - The Loop
Do you like this video?
Play Sound
For the side mission with the same name, see Karmageddon.

In-game time
“Toni, my son, compared to the degenerates in this town you're a saint! Their cars pump the Devil's bum gas into our children's lungs! They are defiling Eden! Go and show these sinners the error of their ways!”
— "Father" Ned

Toni again drops by the cathedral and is greeted by Ned Burner, who is posing as the local reverend. He tells Toni that the motorists of Liberty City pollute the air with 'the Devil's bum gas' and that he wants Toni to show them the error of their ways. Toni drives to the Fire Station in Belleville Park, steals a Firetruck and begins to cause havoc by attacking the motorists and pedestrians. After causing a certain amount of havoc, Toni destroys the Firetruck. A radio report then airs about the havoc on Staunton Island.

The havoc caused is a points-meter, with points given for:

The reward for completing the mission is $1,500. The Karmageddon side mission and the False Idols mission are unlocked.

Due to the side mission being unlocked the northernmost of the two fire trucks at the Staunton station will hereafter launch the Karmageddon side mission first, with the Firefighter mission available afterward. 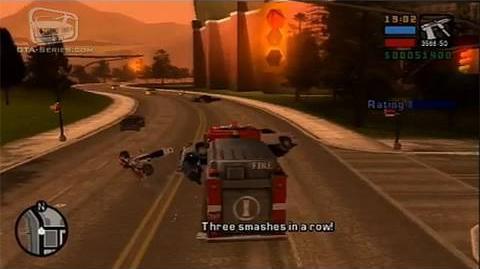 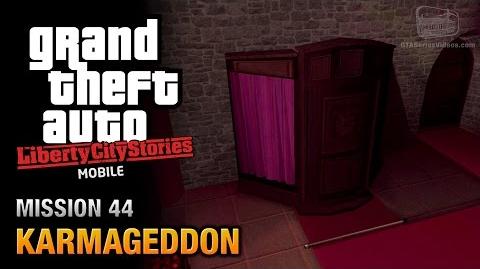