"It takes a special kind of integrity for a man to be both a newsmaker and a marketmaker without it becoming a conflict of interest."
―Karl Kelly

Kelly is a finance reporter for Weazel News, and the author of the book, Mounting Bulls and Riding Bears, who is living in Richman, Los Santos.

During the events of the main story, Kelly can be heard reporting on various events during Weazel News radio breaks, as well as promoting his book. Likewise, he writes some of the articles that can be read on the Internet in GTA V following various missions. During the events of the game, he and his wife Cynthia, a finance reporter for the Daily Globe, are passing through a divorce. The two actively slander each other in their publications, usually derailing the discussion the article's actual headline. Kelly claims that, despite the divorce proceedings, she will not take any of the profits from his book's sales. Cynthia retorts in one of her own articles, referring to Kelly's book as "garbage".

Kelly's Lifeinvader account details his daily life and serves as a platform for him to further promote his book. Via this profile, it is also revealed that Kelly's birthday is on July 27. 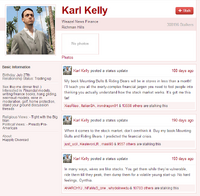 Karl's Lifeinvader page.
Add a photo to this gallery
Retrieved from "https://gta.fandom.com/wiki/Karl_Kelly?oldid=1206783"
Community content is available under CC-BY-SA unless otherwise noted.