The company is most likely based on Toyota since most Karin cars are inspired by Toyota models, although their logo appears to be based on the Lexus logo (similar to how the GTA equivalent of Lexus, Emperor, features a logo that resembles that of Toyota). The Sultan, Sultan RS and Sultan Classic take inspiration from Subaru models, while the Kuruma is primarily based on a Mitsubishi model.

Alternative Karin logo seen on the Futo before the After Hours update. The Classic Decals livery in After Hours does not use this logo 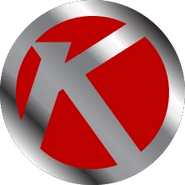 A Karin badge with red, seen on the 190z.
Add a photo to this gallery

The rally team appears to have many companies sponsoring them as seen on their livery, including:

Retrieved from "https://gta.fandom.com/wiki/Karin?oldid=1267964"
Community content is available under CC-BY-SA unless otherwise noted.