GTA Wiki
Register
Don't have an account?
Sign In
Advertisement
in: Pages with unsourced statements, Pages with unclear information, Characters,
and 5 more
English

View source
watch 02:46
The Quarry - The Loop
Do you like this video?
Play Sound
For the receptionist at Goldberg, Ligner & Shyster, see Karen.

Rebecca Henderson
“I'm sorry that I lied to you. And... and weirdly in some ways you're a nice guy... better than the creeps I normally date.”
— Karen Daniels to Niko Bellic in Wrong is Right.

In 2008, she is an undercover government agent who works for United Liberty Paper. Before her true identity is revealed, she becomes Niko Bellic's girlfriend under the alias 'Michelle'. By 2013, she became an interrogator for the IAA.

“Michelle? Karen. We gave her her life back. We didn't play too rough. We gave her some money. She still works for us.”
— United Liberty Paper Contact on Karen in Dust Off

Very little is known about Karen's background because of her status as an undercover agent. She claims to have been raised in the Midwest and was apparently coerced by the United Liberty Paper Company into becoming an agent for them, so she may have past criminal connections herself. This notion is made more likely to be true by a statement made by the United Liberty Paper Contact, who said that in exchange for working for them, they would 'give her her life back', suggesting that she had something to hide, possibly a criminal past. Even though her job requires her to deceive those around her and keep a certain level of emotional detachment, she appeared to genuinely care about Niko, and seemed remorseful for betraying him, further suggesting she was coerced into her job.

“You see, Niko, I have been working for the government. I'm afraid it's my job to watch you.”
— Karen revealing her government affiliation to Niko Bellic during The Snow Storm

Niko's first encounter with Karen (then known as Michelle) is during the mission "Three's a Crowd" where Niko has to pick her and Mallorie Bardas up from the subway station and take them back to Karen's apartment in Rotterdam Hill. During the car ride, Mallorie suggests that she and Niko go out. Karen tells Niko that he's "the kind of guy she wants to get to know." After this encounter, the mission "First Date" will unlock. After the first date, Niko can take her on a number of dates there after until the mission "The Snow Storm" is completed, where she will confess to Niko that she has been watching him and working for the government.

Sometimes if Niko asks her to come in for a coffee, she will make references to the Hot Coffee Modification controversy. For example, in one instance if Niko asks to come in for coffee, she will say that "would cost almost $20,000,000" This is a reference to the total amount that Rockstar Games agreed to pay in settlements for various lawsuits caused by the Hot Coffee Mod in Grand Theft Auto: San Andreas.

After revealing her identity, she confiscates Elizabeta's cocaine, and naturally, she and Niko break up.

During a mission for ULPC, Niko asked what Karen's reward for bringing in Niko was, to which he replies "We gave her life back", once again hinting towards a previous criminal affiliation.

“You've done good work, made this country safer, but that does not mean I've got to like you.”
— Karen to the GTA Online Protagonist.

Five years after the events of Grand Theft Auto IV, it is revealed that Karen is now a high-ranked IAA agent. She appears during The Humane Labs Raid first set-up mission, where players are tasked to meet up with Karen in order to receive access codes to the facility. Karen asks if the protagonist's heist crew were involved with The Fleeca Job and warns them what they're getting into now is a "whole different ball game". After receiving confirmation from the IAA that the crew is legitimate, she prepares to hand the code to the crew leader, but when she puts down the briefcase containing the access code, an FIB team ambushes the meeting and kills her bodyguard. Karen immediately runs off while the crew covers her escape by killing the FIB agents.

She is later seen at the end of the heist finale, where she talks about how the IAA can get anyone to do their dirty work by paying them. She then hands one of the crew members a Grenade to destroy the evidence and then leaves the area.

“Next I'll have this thing so far up your ass, your tonsils will be playing shadow puppets. You think we can't do that? We can. It's in our guidelines.”
— Karen, torturing Mr. K.

She is seen in the mission Three's Company, where she tortures Mr. K by attacking both his hands with a flashlight and then threatens to sodomise him with it. However, before she can carry out her threat, Michael De Santa interrupts the torture session by smashing through the office window as part of an FIB rescue operation. Michael and Franklin Clinton, who was stationed in a nearby building with a sniper rifle, start opening fire on the agents, but Karen manages to escape unharmed and calls for back-up. Nevertheless, Michael gets away with the prisoner and she is not seen again for the rest of the main storyline.

In what must be a continuity error on the part of Rockstar Games, her IAA identity card[2] is signed with the name "Michelle ABC" instead of her real name, "Karen".

Every single encounter that Niko has with "Michelle" has a hint that she is trying to take information from him, she will always ask Niko if he is seeing or involved with someone dangerous, will constantly say that she is a good listener and that Niko can tell her anything he wants. When Niko takes her to a bar, he will even mention while drunk, that he saw her putting something in his drink. Sometimes, after a random date with her, Niko, will say that "There is something strange about her", showing that Niko is suspicious about her behavior. After disclosing her true identity, it is revealed that Karen is a smoker. She is not seen drinking alcohol, though it is unknown if this is related to her job or as a lifestyle choice.

She is an excellent pool player; capable of pocketing 3-5 balls in a row, and rarely makes mistakes.

She is possibly based on the character Nina Myers from the TV series 24.

Her favorite radio station is Vladivostok FM, although this may be a ruse to appear more compatible with her target(s).

Despite her intentions, it appears as though Karen genuinely fell for Niko during their time together. This is due to the fact that she is sometimes surprised, upset and genuinely happy when talking to Niko, and after a fair amount of dates, Niko doesn't have to ask to be invited inside. She is also visibly hurt when she is forced to betray him, and upset when Niko calls her a "fucking bitch." After this, she is seen outside the United Liberty Paper building in Algonquin smoking a cigarette. She apologizes to Niko for lying to him and says that he is a "nice guy" who is "better than the creeps [she] normally date[s]", indicating that she took a liking to Niko even though she was only supposed to spy on him.

In her appearances in GTA V and GTA Online, she is portrayed as an efficient, more ruthless government agent.

Karen's early appearance as seen in the "Move Up, Ladies" trailer of Grand Theft Auto IV.

Karen as she appears in GTA IV, under the false name "Michelle".

Karen as she appears in GTA V.

Karen as she appears in GTA Online. 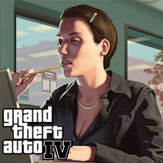