"Somewhere in the history of the 4x4, America lost its way. The seats got too comfy, the suspension got too forgiving, the stylings got too polished. The Kamacho is a lifeline thrown across fifty years of compromise, taking you right back to a time when a good 4x4 was used for crossing a desert, not making a school run."
―Southern San Andreas Super Autos description.

The Canis Kamacho is an off-road utility truck featured in Grand Theft Auto Online as part of the Doomsday Heist update.

The vehicle is strongly based on the Jeep Crew Chief 715 concept, which is itself a homage to the Kaiser Jeep M715. Notable differences include the headlight setup of round and rectangular headlamps rather than the Crew Chief's double round headlamps, as well as a minor change on the lower lamps to feature yellow and white lights. The rear end features a dual tail light setup of red and yellow, as well as white lights on the bumper, opposed to the characteristic Jeep's single light setup of red and white.

The Kamacho features a soft top similar to the Mesa and the Crusader, as well as a floodlight bar similar to the Riata and the Barrage. As expected from a vehicle of its type, sump guards are visible in both ends of the underside and static winches on the bumpers.

The Kamacho is an adept offroader, with the high torque and high ground clearance giving it immense capability offroad. It is capable of tackling even the roughest terrain, with 50/50 torque distribution giving it an advantage on uneven terrain. Durability is good and can be further improved with the addition of bullbars. Its steering is relatively heavy due to its weight. 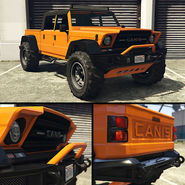 Kamacho poster.
Add a photo to this gallery

Retrieved from "https://gta.fandom.com/wiki/Kamacho?oldid=1079116"
Community content is available under CC-BY-SA unless otherwise noted.