Standard White - 100%
“Somewhere in the history of the 4x4, America lost its way. The seats got too comfy, the suspension got too forgiving, the stylings got too polished. The Kamacho is a lifeline thrown across fifty years of compromise, taking you right back to a time when a good 4x4 was used for crossing a desert, not making a school run.”
— Southern San Andreas Super Autos description.

The Canis Kamacho is an off-road utility truck featured in Grand Theft Auto Online as part of The Doomsday Heist update, released on February 6th, 2018, during the Battle Week event.

With a robust design and an utilitarian appearance, the Kamacho is distinctive by the front end; the upper side has a slanted shape that houses the black grille, the "CANIS" letterings embossed in the center and the unusable LED stripes, while the outer edges house the circular headlamps. Below the grille there is a black strip that houses a set of white and amber lights just below the headlamps, while the lower side is predominated by the utility bumper housing a license plate, two smaller circular headlamps, a winch, two hooks and two side intakes, along with a protective frame above intended to protect the grille. Its hood is fitted with two safety hooks.

The sides of the car denote its utilitarian appearance, featuring bulky arches, square-shaped frameless doors, black handles, black rear-view mirrors and tubular side steps. The cabin area mostly consists of a soft top similar to the Mesa and the Crusader, fitted with a floodlight bar similar to the Riata and the Barrage.

The rear of the car features a tailgate with "CANIS" embossed on it, along with a set of square tail lights on the angled edges of the truck bed. It is protected by a bulky bumper, which features a winch, two rectangle reverse lights, two hooks and a passenger-side license plate. Two slanted exhausts can be seen on either side.

The vehicle reuses the "Cavalcade" interior from various SUVs. As expected from a vehicle of its type, sump guards are visible in both ends of the underside.

The primary color of the vehicle is applied to the bodywork and engine's cam covers, while the secondary color is applied on the fenders and bumpers. Its stock wheels share the same rim design as the Dubsta 6x6, the off-road variant of the Mesa and the Sandking XL, sharing the rim design with the "Six Gun" muscle wheels available in Los Santos Customs. However, the tires retain the old tread pattern. Although it is set to spawn in a white color, purchased examples come with the default alloy color.

The Kamacho is an adept off roader, with high torque and ground clearance, giving it immense capability offroad. It is capable of tackling even the roughest terrain, with 50/50 torque distribution, giving it an advantage on uneven terrain. Durability is good and can be further improved with the addition of bullbars.

The Kamacho has great top speed and acceleration compared to vehicles like the Riata and the Dubsta 6x6, as well as good handling, with no signs of fishtailing. Its steering is relatively heavy due to its weight and length, though it can still manage turns easily.

The vehicle is powered by a single-cam V8 engine with two air filters on it, powering all four wheels through a 5-speed gearbox. It shares the same engine sound from vehicles like the Granger and the Dubsta 6x6.

Installing any "Roll Cage" modification will increase its traction slightly, in the same way as spoilers. 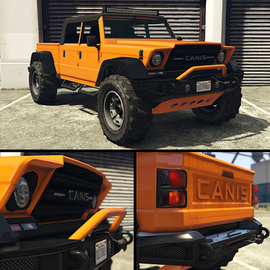 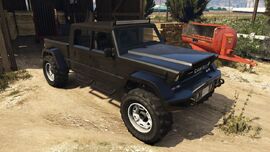 The Kamacho on the updated Rockstar Games Social Club. 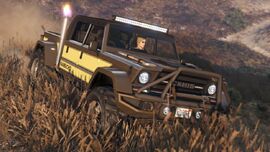 The Kamacho in the cinematic preview on Rockstar Games Social Club. 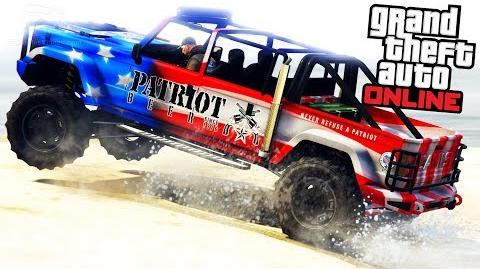 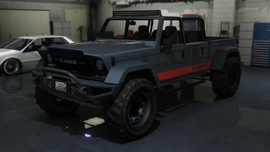