“Is it a truck? Is it a golf cart? Is it a bathtub on wheels? It's whatever you want it to be. The Kalahari is a super-lightweight off-road utility vehicle used by the French army, which possibly explains why they're always so late to everything.”
— Southern San Andreas Super Autos description.

The Canis Kalahari is a small, hardtop utility and off-roading truck featured in the Beach Bum Update for Grand Theft Auto V and Grand Theft Auto Online, with a topless variant available after the Last Team Standing Update is installed.

The Kalahari is based on the 1968-1987 Citroën Méhari (specifically the original French model due to the flatter front), with some cues from the Citroën Pony. The headlamps seem to be derived from the BMW E30 (E32, E34).

The vehicle is depicted as a small truck with a lightweight bodywork, where the front end features a small extender/sump guard on the lower side, as well as a small bumper with the license plate on the centre. The upper area is occupied by a black central grille, which extends towards the bumper area and has a wider horizontal separation, while the outer edges are occupied by inset panels that house twin circular headlamps on the front end and rectangular amber lights on the front quarters. The bonnet is relatively tall and bears silver "CANIS" lettering on the front and the manufacturer emblem on the upper side.

The sides of the car are relatively simple, featuring flared arches and various horizontal details running across the car, with a dedicated section for the doors. A set of square-shaped mirrors can be seen on either side of the windscreen base, while the area behind the cabin is occupied by a small bed, whose upper surfaces use the same details as on the sides.

The rear end features a set of circular tail lamps that are similar to the ones from the Mesa, while the central tailgate bears the silver "CANIS" lettering on the left, the manufacturer emblem on the right and the license plate on the centre. A small black exhaust is seen on the lower side.

In the original versions of the game, the Kalahari has a beige/light brown dashboard with black seats. In the enhanced version of the game, however, the Kalahari receives a full beige-colored interior shared with the Bodhi, albeit cleaner in appearance.

The vehicle may spawn either with an open top or with a set of extra pillars behind the cabin area and black frames above the cabin and truck bed. The same supports may also have either a black soft top or a black soft top with enclosed bed and rear windows, resulting in four different variations. The vehicle only has access to a single colour applied on the body and uses a set of white plain rims with four bolt details around, wrapped in medium-profile tyres with narrow track width.

The Kalahari performs quite well, having a nice top speed and acceleration, it also fairs well off road. While this vehicle has good acceleration, its top speed is not up to par when it comes to competing against other faster vehicles. Furthermore, its thin tire profiles makes it less desirable for off-roading purposes. The Kalahari is great for doing stunt jumps as its incredibly light weight allows it to travel great distances in the air. It is also very nimble due to its size and thin tires.

The car is powered by a modeled turbocharged Inline-4, coupled with a 4-speed gearbox in a front engine, all wheel drive layout. Its engine sound is rather unique, somewhat resembling the ones from cars like the Jackal and the modern Police Cruiser, with slight similarities to the ones from vehicles such as the Bagger and the Hot Rod Blazer.

This article needs more images of:
Kalahari with frames only. 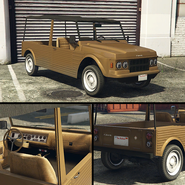 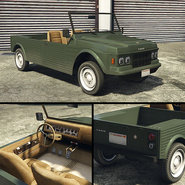 The Kalahari on the updated Rockstar Games Social Club.

The Kalahari in the cinematic preview on GTA V Rockstar Games Social Club.

The Kalahari in the cinematic preview on GTA Online Rockstar Games Social Club.

In the enhanced version, pre-modified Kalaharis may spawn in beach areas, like the Bifta. They usually spawn with accesories intended for off-roading, including custom off-road tyres. Aside from the color schemes, at least one example has a unique customization set, including a spare tyre on the hood.