Natalie Walsh Davis (1998) Horace Walsh (2001)
“Horace Walsh say "simmer down the violence!" Too much blood in the city streets. And too many babies are crying in Liberty City...”
— GTA III

The radio is also mentioned in Grand Theft Auto Advance.

In GTA III, K-JAH is run by Jamaican DJ, Horace "The Pacifist" Walsh. Playing dub on the station, he makes commentary between and during songs about the conflict going on in Liberty City, encouraging citizens to be peaceful and listen to Dub. He will also comment on the SPANK problem in Liberty City, saying things such as "Iman say: there's too much SPANK buisness a gwaan" or giving shout outs to the Uptown Yardies telling them "To stay off the SPANK, my brethren". It is also one of the few stations not owned by Love Media, the mega-corporation owned by Donald Love, as seen from Horace's line, "Mi have no love fi Donald Love, mon". This may explain why the radio doesn't have commercials.

During the development of GTA Advance, K-JAH was one of the three radio stations that was originally suppose to appear in the game (along with MSX FM and Lips 106), but was dropped. However, a billboard with the stations logo appears in Bedford Point near the Ammu-Nation, along with the slogan "Reggae to rock". It is located near the territory of the Yakuza in Liberty City.

Also in GTA Liberty City Stories, the DJ gives a shoutout to K-JAH West saying, "this goes out to me Brethren on the West Coast", and eventually goes on commenting on K-JAH West's DJ Johnny Lawton. 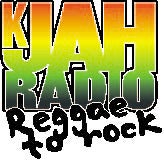 Promotional and possible second beta logo of the station which was later reused as a wall advertisement in Grand Theft Auto Advance.

The in-game advertisement for the station in GTA Advance.