Depicted as a sleek 1960s sports car, the Jugular E is apparently based on the Jaguar E-Type. In addition to appearing with a single-tone body colour, the Jugular E may also come with a two-tone "racing" stripe that runs from the front to the back of the car.

Despite its design, the Jugular E only fares averagely in performance, with slightly above average top speed, acceleration and grip, and average brakes and handling. 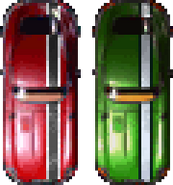 Alternate paintworks of the Jugular E.
Add a photo to this gallery

Retrieved from "https://gta.fandom.com/wiki/Jugular_E?oldid=1164239"
Community content is available under CC-BY-SA unless otherwise noted.