In-game time
“The legal system falls apart if jury members are honest. We approached twelve members of a jury, and paid them to bring down a guilty verdict. My competitor must have paid them more for innocent. Only because they took my money do I greenlight all of them. Take them out quick, or the authorities will catch on.”
— Description.

Judging the Jury is a mission in Grand Theft Auto Online given to the player by Martin Madrazo. It is available for up to 8 players.

Madrazo paid a group of eight jurors to bring down a guilty verdict, but the group of jurors stole the money from Madrazo, not judging the verdict. The team now needs to take out eight jurors around the city of Los Santos. They are all in different places, all unarmed. After the team takes all the jurors out, Madrazo will send a message to each one of them that the cops are moving in to protect the four remaining jurors. The player(s) will now be on a four minute time limit. Those four last jurors will be protected by the LSPD and the team will receive a three-stars wanted level by killing any one of them. After all the jurors are dead, only one player must lose his/her wanted level and go to Madrazo's mansion. 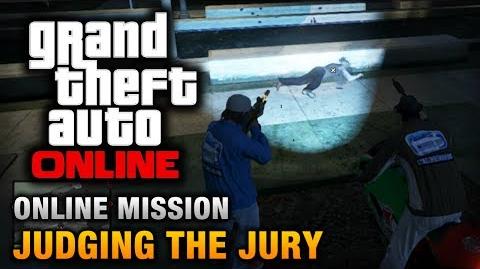